This week’s video features an adorable French Bulldog singing her heart out. Diagnosed with advanced spinal arthritis at only 6 months old, Chili learned an alternate way to enjoy life! 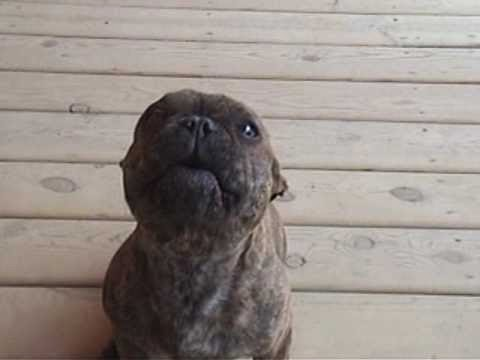 The French Bulldog is a small breed of domestic dog. "Frenchies" were bred in the 1800s by lace makers first in England then in France when displaced by the Industrial Revolution.

Frenchies are playful and affectionate. Their loyal, loving nature makes them wonderful companion dogs. French Bulldogs can be a challenge to train due to their willful, stubborn nature. They require patience, repetition and early socialization.

The origin of the modern French Bulldog breed descends directly from the dogs of the Molossians, an ancient Greek tribe. The dogs were spread throughout the ancient world by Phoenician traders. British Molossian dogs were developed into the Mastiff. A sub-family of the Mastiff were the Bullenbeisser, a type of dog used for bull-baiting.

The French Bulldog, like many other companion dog breeds, requires close contact with humans. They have fairly minimal exercise needs, but do require at least daily walks. A flat-faced breed, French Bulldogs cannot live outdoors. Their bulk and their compromised breathing system makes it impossible for them to regulate their temperature efficiently. In addition, they are top heavy and therefore have difficulty in swimming. Precautions must be taken when exercising during hot or humid weather, as they are prone to heat strokes.