Dog Helps Save The Life Of A Baby Dolphin

A dog helped save the life of a baby “dolphin” when she spotted the stricken creature on a Welsh beach.

Two-year-old springer spaniel Leia alerted her owner, Rich Wilcock, to the sea mammal that had washed up on the Criccieth shoreline.

Rich said: “I was stood taking pictures and videos of the scenery when Leia started to make a right old fuss. 'I lifted him gently under the belly and popped him back amongst the waves' “She kept coming up to me, barking and nudging me, she must have smelt the dolphin from a mile off. 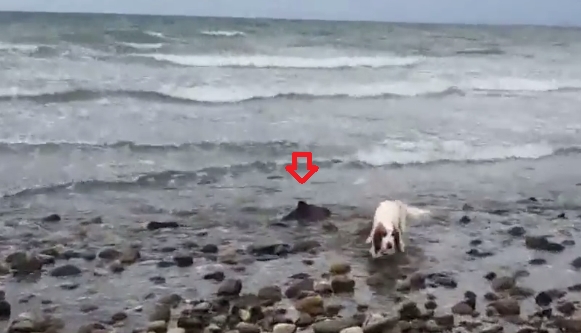 “At first I thought it was a baby shark, it was only about one and half foot but on a closer inspection I could see the blow hole on top of his head and realised it was a dolphin.“ There was nobody around for miles so I did what I could as gently as possible. I lifted him gently under the belly and popped him back amongst the waves and he swam away into deeper water.

“I combed the beach for a while afterwards and stayed for an hour or so to make sure he made it back out to sea.”