Fla. Man Wins 'Life-Changing' $2M on Lottery Ticket — All Thanks to His Pregnant Dog!

Leonard Linton, 42, of Pinetta, purchased the winning ticket during a quick trip to Stop & Shop in Live Oak after receiving word that his dog did not appear to be feeling well 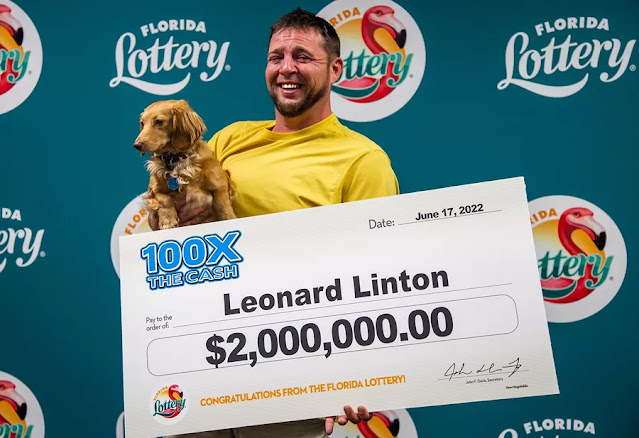 A Florida man has hit the lottery — and he's giving his pregnant dog Ivy credit for his good fortune.

Leonard Linton, 42, of Pinetta, "received a call that Ivy was not feeling well" on the day he purchased his winning ticket, Florida Lottery officials said in press release.

"To get to her as quickly as possible, Linton took a different route home," lottery officials explained.

That different route included a quick visit to the Stop & Shop on Howard Street in Live Oak, where Linton purchased a $10 "100X THE CASH" scratch-off game. To his surprise, he won the $2 million grand prize.

"I still can't believe it," Linton told the Lottery, adding, "This is life-changing."

Linton claimed a one-time, lump-sum payment of $1,645,000 at the Lottery Headquarters in Tallahassee on Monday, per the Lottery's press release.

The Lottery shared a photo on Twitter of Linton smiling ear-to-ear while cradling his pup as he posed with his check.

When asked what he would do with the money, the Madison County man said, "I'm definitely getting Ivy a new kennel!"

The Stop & Shop in Live Oak "will receive a $4,000 bonus commission for selling the winning ticket," according to Monday's press release.

Never miss a story — sign up for PEOPLE's free daily newsletter to stay up-to-date on the best of what PEOPLE has to offer, from juicy celebrity news to compelling human interest stories.

Launched in January, the "100X THE CASH" scratch-off offers a chance to win one of eight $2 million prizes, one of which Linton has won, according to the Lottery. More than $337.9 million is available in cash prizes through the game.