A dog stolen from a teenager while he was walking him three months ago has been found and reunited with his owner. 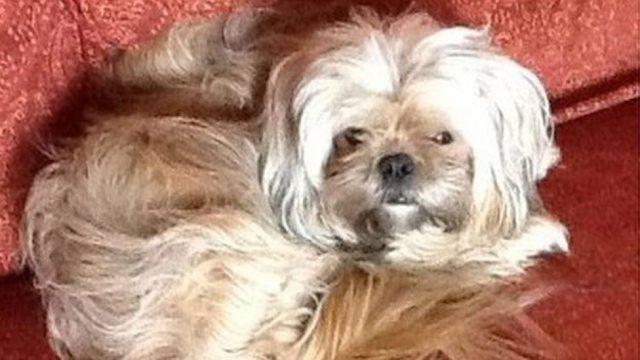 Max, a two-year-old brown and white Shih Tzu crossed with a Cavalier King Charles, was found in Aldershot, Hampshire, and returned home on Sunday.

The dog's owner said he was ecstatic as the family were devastated to lose him.

Police are trying to find the youth who grabbed the dog in Colney Heath, Hertfordshire, in September.

Max was taken at just after 21:00 BST on 10 September. His teenage owner's mobile phone was taken and, as the thief tried to flee, he got caught up in the dog lead and picked up the animal and took it with him.

Police said the thief was aged 16 or 17, of average build and about 5ft 10ins tall with short shaven dark hair. He was wearing a dark tracksuit.

He fled in a white BMW 1 series car with two other men.

Several appeals for information and the safe return of Max were made through the local press and social media sites.

Aside from losing a bit of weight, Max is now doing very well back at home, Det Con Stuart Bence said.

"This is probably the best Christmas present the family could have wished for."

Max's owner, who did not want to be identified, thanked the Stolen and Stray Pet Rescue organisation for recovering Max once he had been recognised on social media.

"I keep pinching myself as I can't believe we have Max back - I'm ecstatic."