"I thought it would be funny to see them all dressed up in their little outfits," Liam Beach said of his pups

The perfect holiday photo does exist!

Dog owner, Liam Beach — from Rhondda, South Wales — managed to get all 17 of his adorable dachshunds to pose perfectly along a decorated staircase in festive Christmas outfits for an epic holiday photo.

Beach has the magic touch when it comes to wrangling pups for pictures. Over the summer, Beach similarly got his pups to pose atop his staircase — however, he only had 16 dachshunds for that photo, having adopted Kansy since then.

“I have done pictures of the dogs previously, dressed up for Christmas on the sofa and thought, ‘I need to top them.’ So I thought I’d do it on the stairs this year,” he told The Daily Mail.”

“I thought it would be funny to see them all dressed up in their little outfits,” he added.

You were right, Liam!

The 20-year-old explained that the holiday photo took him nearly an hour to perfect, because the Christmas outfits made the pups excited and they didn’t want to sit still.

“It took about 45 minutes to get the picture, because when the dogs were dressed in their outfits they thought it was time to go walking and all went crazy running around the house,” he said. “So, I had to calm them down before putting them on the stairs.”

Once all 17 canines were on the stairs, Beach had to use a squeaky ball and a bag of treats to keep them posed and ready for the photo.

“After a while on the stairs with their jumpers on they began to fall asleep so I had to work hard at keeping them awake and looking at the camera,” he explained. 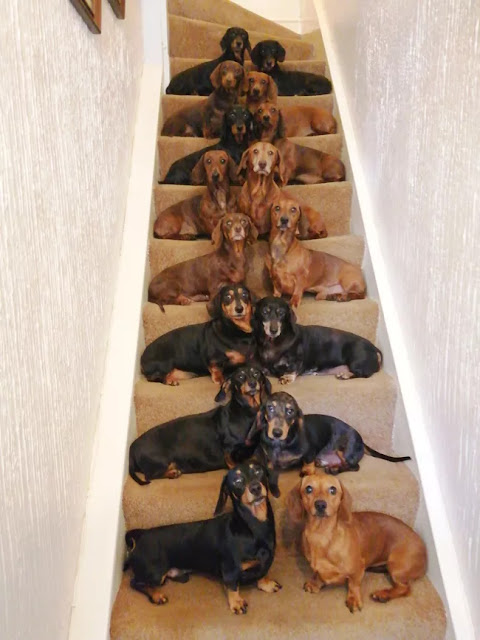 HIs first dachshund decked staircase photo from this summer was a bit easier to create.

At the time, Beach told The Mirror, that he trained his long dogs to pose on the stairs and took the first shot in a few minutes, after his friend told him it was impossible to organize all of the pups for one photo.

When they aren’t posing for viral moments, the pooches compete in dog shows with Beach, who said in July that he hopes to open a dog grooming salon one day.