Drowning Dog Desperately Hangs On In The Hope Of Being Saved

A dog fighting for her life was saved just in time. The dog had fallen into a water reservoir and was losing her strength and having difficulty staying above water after hours of trying to hang on.

Her paws were bloody from trying to hold on to the sides of the well. That’s when Animal Aid Unlimited arrived just in time to save her…

"We got a call to rescue a dog fighting for her life after falling in a deep well. She may have been swimming for hours before a villager saw her and called our helpline. She was quickly losing her strength and could barely hold on to the sides of the well."  Animal Aid Unlimited

The mission of Animal Aid Unlimited is to rescue and treat the un-owned street animals of India who have become ill or injured, and through their rescue inspire a community to protect and defend the lives of all animals.

Thousands of dogs, cows, donkeys and other animals live on the street in Udaipur alone, and millions across India.

In the region where Animal Aid works in Udaipur, Rajasthan, the animal’s presence on the street is generally accepted, and feeding street animals is even a part of the culture. However, as traffic increases and the city expands, life can be a daily struggle for many animals on the street. 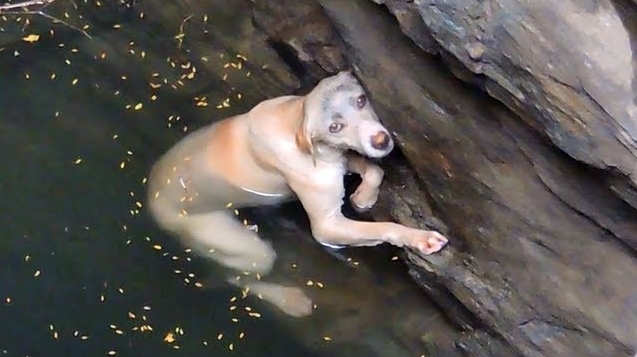 Street dogs survive off of human left overs in India much as they have done for thousands of years (more than 10,000 years!) They find left-overs from restaurants and markets, and also enjoy food left especially for them by kind neighbors.