The Great Dane is one of the largest dog breeds in the world. The sight of a graceful giant is not new to most of us. The Great Dane became even more famous thanks to the Scooby-doo fairy tale, the title character of which belongs to this breed. The film hero was always hungry and scared, but never allowed his friends to get hurt. 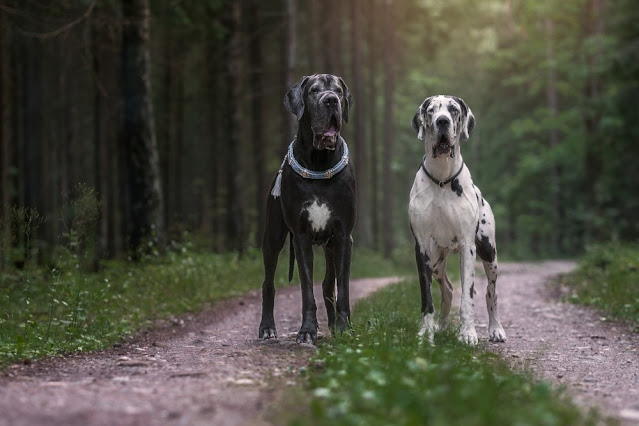 Great Dane – the most important information about the breed

The Great Dane is a huge dog breed that is willingly used today for companionship and guarding. According to the FCI classification, it belongs to Group 2 (Pinscher, Schnauzer, Molossian and Swiss Cattle Dogs), to Section 2.1 (Mastiff Molossian). The first official breed standard was created in 1880 in Berlin and has been changed many times. Today, the breed is assessed according to the FCI standard number 235. The Great Dane is not subject to working tests and lives for about 8-10 years.

According to the most probable sources, the Great Dane comes from crossbreeding of mastiffs with greyhounds. These dogs were intended to aid in hunting big game, therefore a strong, fast and fierce dog quickly gained popularity. At one point, the population of wild boars and other hunted animals decreased. Along with the decline in hunting intensity, the interest in the Great Danes has declined. However, it turned out that these dogs can be wonderful companions with a talent for defending the home and family. Great Danes began to be bred in this capacity, and it has remained so to this day.

The appearance of a Great Dane

The Great Dane has an appearance characteristic of its breed. First of all, he is one of the largest dogs out there. The minimum height of the male is 80 cm, and his weight should be in the range of 50-90 kg. In the case of bitches, it is a minimum height of 72 cm and a weight in the range of 45-59 kg. Up to a point there was a trend that the taller the dog was, the better it was judged, and its weight had to be simply proportional to its height. Later it was established that the male can be up to 90 cm tall and the female is 84 cm tall.

The second distinguishing feature is the extremely proud “styling”. The way of being and moving the Great Dane has a lot of elegance. His head is especially appreciated for its expressive character. In fact, he can sometimes assume a pose that resembles a well-rounded sculpture. Besides, the details of its structure are clearly visible.

The coat of the Great Dane may be: 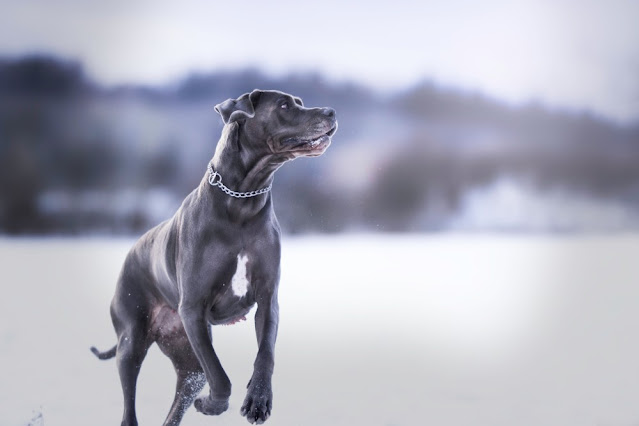 The Great Dane’s coat is very short, dense and fits snugly against the body. In addition, thanks to its extraordinary smoothness, it is shiny. It has no undercoat and cannot be dull or hard.

What kind of dog is a Great Dane? If you observe him from the perspective of a stranger to him, you can get scared. After all, it is one of the largest dog breeds in the world. Hearing his loud barking, you cannot help but respect him. Fortunately, the Great Dane is not an aggressive breed. In truth, he is very reserved towards strangers, but he is not set to hurt. It is enough for him not to feel provoked or threatened.

When it comes to your own family, it’s even better. The standard Great Dane is a dog friendly to people, who loves its owners boundlessly and is ready to make any sacrifice in their protection. A well-mannered dog will be difficult to provoke, rarely barking, therefore not very noisy and well-disposed towards other animals. It is suitable for playing with children, but requires some control on the part of an adult guardian. After all, it is a dog so large that it could even unknowingly hurt your little one. However, we are sure that this would not be deliberate behavior.

Despite its innate gentleness, the Great Dane is not a living cuddly toy. He needs a guardian who will clearly set boundaries and show what he expects from the dog. He is a knowledge-assimilating dog, but he is also a bit lazy. He carries out the orders somewhat reluctantly, sometimes refusing to do what he is told. Great Danes react badly to duress, so we do not recommend this form of training. The most important thing in all this, however, is to devote as much time as possible to the dog. Not only for studying it, but most of all for being together. Great Danes like to accompany people, loneliness has a bad influence on them.