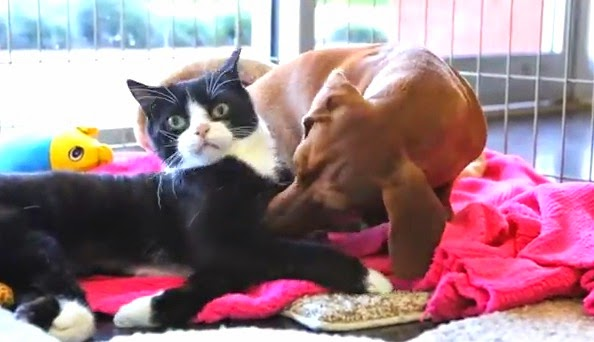 In Lake Mary, Florida a dachshund and a paralyzed tuxedo cat were found abandoned in front of a gated community. Seminole County Animal Services was called to pick up the pair, but the little dachshund was so protective of his feline friend that it took some time to capture the two and take them to the local shelter.

At first, the pair was separated – the dachshund went to the dog kennel and the cat was in medical care. The dog now, named Idgie, was frantic and someone fortunately understood that these two animals were deeply bonded. They brought the cat, now named Ruth, back to her canine buddy. That calmed Idgie right down.

The cause of Ruth’s back leg and partial front leg paralysis was unknown, so the non-profit group, TEARS, Every Animal Receives Support, stepped up and offered to pay for experimental therapy and acupuncture for Ruth. Unfortunately, Ruth’s condition did not improve, so the shelter sought to adopt out the cat-dog pair together to a special owner who could manage Ruth’s disability with the care and love it needed.

Jacqueline Borum, the owner of Hollywood Houndz Boutique and Spa, offered to adopt the pair and gave them a home in her shop. Now Ruth and Idgie get plenty of attention and treats. Plus, Ruth gets daily baths and Idgie gets daily walks from both Jacqueline and her customers. When not getting celebrity treatment, the two furry friends can be found cuddled up together — usually with Idgie curled up protectively around Ruth.