Bath time is the best time. Barry the pug has irrefutable proof. 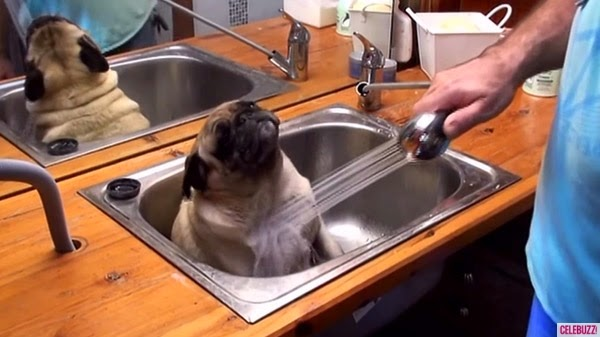 Barry’s owner, Australian carpenter and photographer David Stanton, posted a video on YouTube last month showing his water-loving pooch luxuriating in a pug-sized “tub.” As you can imagine, it's two minutes of over-the-top sudsy cuteness.

The Pug is a breed of dog with a wrinkly, short-muzzled face and curled tail. The breed has a fine, glossy coat that comes in a variety of colours, most often fawn or black, and a compact square body with well-developed muscles.

Pugs were brought from China to Europe in the sixteenth century and were popularized in Western Europe by the House of Orange of the Netherlands, and the House of Stuart. In the United Kingdom in the nineteenth century Queen Victoria developed a passion for Pugs which she passed on to other members of the Royal family.

Pugs remain popular into the twenty-first century, with some famous celebrity owners. A Pug was judged Best in Show at the World