Bearded Woman Adopts Rottweiler To Protect From Society. Because She Has to Face Lots of Difficulties.

A dog is a great strength in everyone’s life. Having a dog makes everyone feel safer. Because well-trained and intelligent dogs always protect their owner’s life at all times. In particular, breeds such as rottweilers have been used since ancient times. They have excellent instincts to protect their owner, owner’s property and family.

Harnaam Kaur is a very popular woman all over the world. Because she is very different from other women. She started growing facial hair at the age of 14. From the age of 14, she did not have a beautiful life. She faced a lot of problems from the society because of her beard like a man. Some even tried to end her life. Even on social media, many people made fun of her.

But after knowing her story, the whole world started talking about her. However, with Stacey Dool, a new documentary produced for her about her life story. The film explained how she learned to love her facial hair. Harnaam walked in London Fashion Week and appeared on the covers of Vogue Japan, Teen Vogue and Cosmo India. As a result, the whole world started talking about her. Many people started loving her. But there was no change in the problems that came to her from the society.

She faced various problems and difficulties even from other friends in her school. Everyone laughed at her. She was made fun of in the whole school. Accordingly, school became her least favorite place in her life. Over the years, she did various things to stop growth of her facial hair. But none of that gave her a solution. So at the age of 16, she decided to grow her beard. Because of the words from the society, her mental level collapsed very deeply. Even her best friends made fun of her. 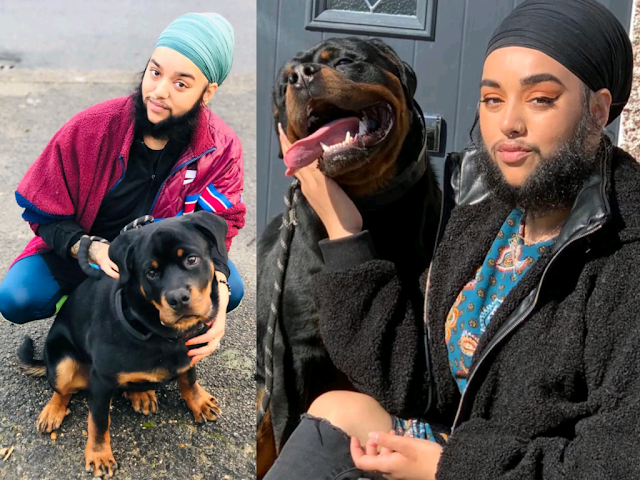 Her story became popular all over the world. Even though she proved to the world that she is a strong woman, the problems did not stop. Even walking alone on the streets was a challenge for her. She always faced problems from many men. Many people even tried to end life of her. Therefore, she decided to adopt a dog for her protection. Accordingly, to ensure her safety, she adopted a rottweiler dog named Kai.

This rottweiler was with her at home as well as whenever she went out. Kai is a large Rottweiler who is very well trained for anything. He protected his owner as best he could. Harnaam says she feels safe with him. She said she had no problem even passing a group of group of five or six-foot-something men.