"One day, I'll climb Mount Everest with Wendy. She'll always be there for me," says 10-year-old Hunter VanBrocklin

With the help of his Great Dane service dog, Wendy, 10-year-old Hunter VanBrocklin is learning to walk again.

The fourth grader, who was diagnosed with cerebral palsy at the age of two, had hip dysplasia surgery in January and now relies heavily on the faithful dog for rehabilitation assistance.

“I love Wendy, because she helps me walk and she gives me independence,” Hunter, who struggles to walk on his own, tells PEOPLE. “She’s a buddy and she’s with me all the time. She’s my best friend.” 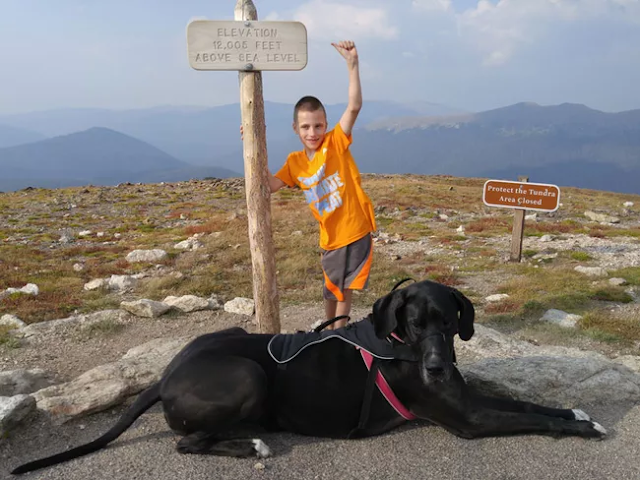 Hunter, who loves being outdoors, would spend time after school going on hikes with his mom, Kelly, and dad, Andrew, in their hometown of Alfred, Maine.

Before they welcomed Wendy into their lives in 2013, Hunter stumbled with every step he took.

“Walking is my favorite thing in the entire world. Wendy nudges me and helps me get off the ground when I fall over,” says Hunter. “When Wendy came to live with us, I cut down my falling to three times a day. Before it was more like 500!”

Wendy helps Hunter maintain balance while walking and is directed by a gentle leader that goes around her nose and neck. Hunter holds onto her harness and when he gives a command he pulls the leader, which moves her head in the direction he wants to go. To step up onto curbs, Hunter places two hands on her and they step up together. 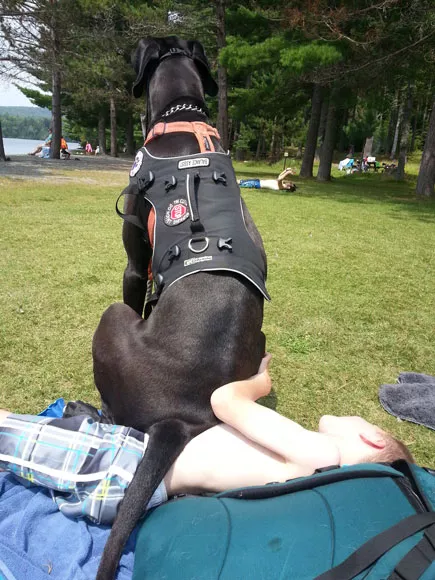 “She’s really the only way I can go hiking,” he says.

Hunter’s mother, Kelly, says the happiness and stability Wendy brings her son moves her “to tears.”

“Their bond is so pure and true,” Kelly, a 36-year-old physical therapist, tells PEOPLE. “She protects him everywhere they go. It’s like having an extra parent around, she doesn’t take her eyes off of him.”

“He’s active and he doesn’t see himself as having a disability,” Dr. Shore tells PEOPLE. “His mind is moving much faster than his body, he wants to go and do and explore and he couldn’t do that with the walker.”

The doctor, who has been treating Hunter for five years, says Wendy is extremely protective of her owner and best friend.

“Anytime a doctors goes in to see Hunter, we have to acknowledge Wendy first,” Dr. Shore says with a laugh. “Their friendship is amazing and Hunter has gotten so much stronger and better at walking.”

He adds, “It’s been cute to see the two of them grow up together.”

Abnormal muscle tightness is a primary manifestation of cerebral palsy. As Hunter grows, his muscles become tighter and deteriorate. His hips also started to move away from the socket, a symptom called hip dysplasia.

The fourth grader had surgery to correct both, and is learning to walk again from scratch. He receives botox and phenol injections every 6-to-12 months to help relax his muscles and reduce spasticity in his ankles.

Hunter tried several smaller dogs before they found Wendy three years ago, and it was love at first sight.

“Within 10 feet of Wendy and Hunter walking together the trainer said, ‘This is it,’” Kelly says. “It was that quick. Wendy wouldn’t let my husband drive away — she would stand behind the truck because she didn’t want Hunter to leave.” 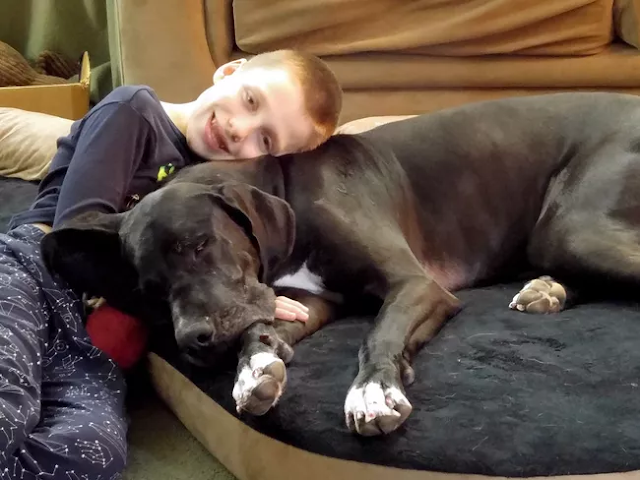 It took Hunter a year to be fully comfortable walking with Wendy, but the pair is now inseparable.

“She loves me, because every night she makes sure I’m in bed okay, and she sleeps in bed with me,” Hunter says. “Right now she can’t on account of my bones.”

Doctors say it will take at most 18 months for Hunter to learn to walk again.

“Nothing is too tough for me to do though,” Hunter says.

“One day, I’ll climb Mount Everest with Wendy. She’ll always be there for me.”