America's first dog was the Native American dog. During the earlier times when Native Indian tribes inhabited all of North America, canines of unknown origins accompanied them everywhere.

The Native Americans were aware of how important it was to prevent inbreeding to keep their dogs healthy. In order to prevent this, the tribes would introduce new blood from other tribe's dogs which accounted for the many types of dogs that were often portrayed in history books. 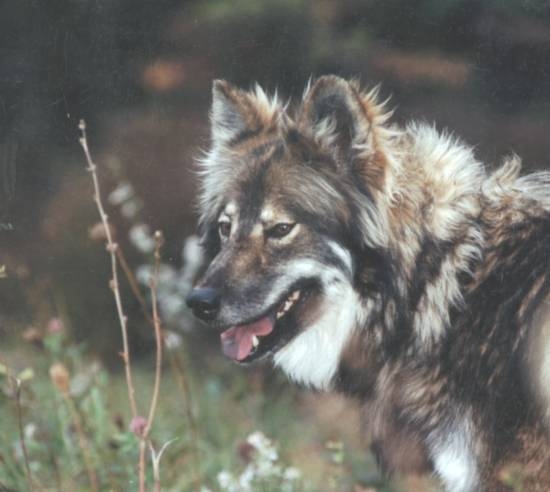 The northern tribes of  Native Americans developed a dog with more of a wolf like appearance while in the western regions the smaller Plains dog was developed. These dogs were very intelligent and versatile as they were expected to fill many roles in a Native American village. In some tribes, dogs pulled a travois carrying the nomadic family’s belongings as they followed their food supply. Dogs were used to hunt for food and as faithful and protective watch dogs over the village. They were even reliable as “babysitters” for the children and elderly when the women were gathering roots, berries and herbs. In certain tribes ,some of the dogs even played important roles in the tribes’ religious ceremonies.

Although it was a wonderful and versatile dog, the Native American dog has become nearly extinct due to the tragic treatment of Native Americans during the last couple hundred years. They were forced to move onto reservations and the traditional lifestyle which relied on the native dog so heavily was lost. Today there are some breeders that are trying to recapture this wonderful dog of the past. By mixing several northern breeds, such as huskies, malamutes, chinooks and also german shepherds with some current Indian reservation dogs, they have been able to selectively breed for the appearance, characteristics and traits of the original Native American's dogs.

The results of these selective breedings has come up with a dog that is friendly and good with other animals and children. It is a very intelligent dog that is eager to please and affectionate and loving with familiar people. This dog does need a yard to exercise in and some good long walks to keep it happy as the original Native American dog was able to go for long distances and pull heavy loads. It also has a fluffy coat but it is easy to maintain. All the wonderful characteristics that the early Native Americans valued so much in a trusted friend, companion and working partner that their dogs signified for them.