Brittany Maynard's Husband Dan Diaz: Our Dogs Are Helping Me Cope with My Grief

Dan Diaz opens up about wife Brittany Maynard’s final hours and how he’s keeping her memory alive. Subscribe now to read the promises he made to her and why he’s finally breaking his silence, in this exclusive P.e.o.PLE interview. 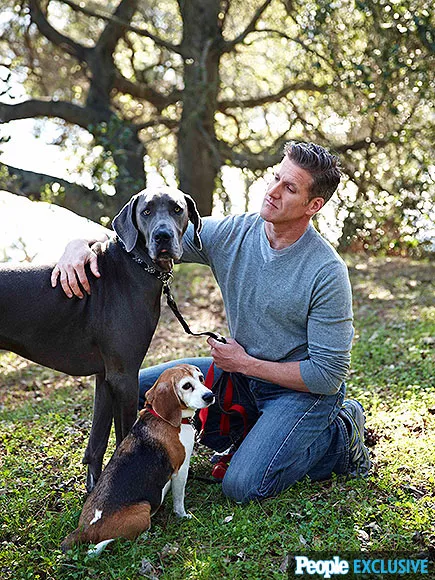 If it weren’t for Charley and Bella, the house Dan Diaz shared with his late wife Brittany Maynard would feel a lot more empty.

“Having them there is comforting,” Diaz, 43, tells P.e.o.PLE exclusively. “It gives me other living beings in the house with me so it’s not as lonely.”

Charley is a 23-month old, 120-lb. Great Dane he and Maynard, got as a puppy in March 2013, while Bella is an 11-year-old, 23-lb. beagle Maynard rescued in southern California when the dog was around 3 years old.

Maynard, 29, who was terminally ill with brain cancer, ended her own life Nov. 1 with medication prescribed to her by her doctor, which is legal for certain terminally ill patients in Oregon.

The couple moved to the state with Maynard’s mother, Debbie Ziegler, and stepfather, Gary Holmes, last June so Maynard could gain access to Oregon’s Death with Dignity Act.

Diaz promised her he would continue to campaign for the legislation after her death.

During a recent interview with P.e.o.PLE at the Alamo, California, home Diaz and Maynard owned, the bond between him and the dogs was evident.

The two were never far from his side. Charley was constantly coming up to Diaz for attention – which he always gets, even if Diaz himself isn’t always conscious of it – while Bella tried to climb on his lap.

Maynard called them her “furbabies.”

“They were members of our family,” Diaz tells P.e.o.PLE. “Bella came first and she’s a great dog, great temperament but she’s certainly the little boss. Then Charley came along as a puppy and he got folded into the mix – with Bella as the one calling the shots.”

Maynard left “quite a few” instructions for their care – everything from making sure they get daily exercise – even if it means hiring a dog walker if he’s working late – to putting a fence around their pool so they don’t fall in.

“I did follow her instructions,” says Diaz. “Every day I take them out to get exercise. They are very well taken care of.”

Maynard was an animal lover who helped find pets homes through her volunteer work at a local rescue while also keeping others that she spotted herself safe until she reached their owners.

“She would bring home strays she’d find walking along the road, put them in our backyard and call the number on their collars until their owners showed up,” Diaz recalls.

He will be appearing on Wednesday’s episode of The Meredith Vieira Show. Check your local listings to find out when and where it airs in your city. Additionally, Diaz will appear on P.e.o.PLE Now Friday morning.

For more from Maynard’s family, pick up the latest issue of P.e.o.PLE, on newsstands Friday.