Can't Make This Up: Corgi Caught on Camera Riding a One-Eyed Pony

Callie Schenker says the corgi's owners are Mennonites who don't go online, so they have no clue their dog and Cricket the one-eyed wonder pony are now internet famous

We’ve seen dogs riding the subway in makeshift bags. We’ve also seen a dog riding a tricycle. Not to mention dogs riding other dogs piggyback in the pool. One impressive pooch we know even rode out a tornado! 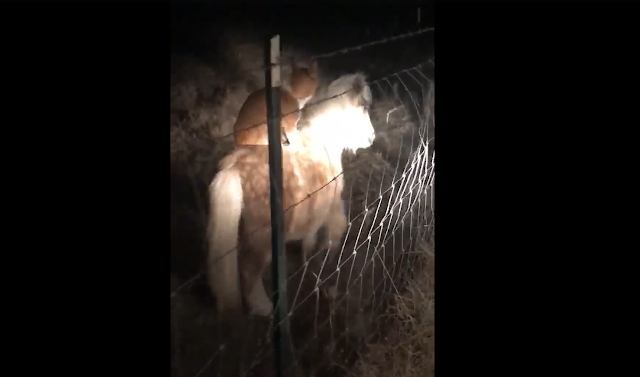 But never have we ever seen a dog riding on top of a one-eyed pony, let alone a corgi performing such a feat! Hard to imagine, and even harder not to laugh your tail off, just ask Callie Schenker who managed to catch the stunning moment on video. Fortunately, the Bolivar, Missouri, woman shared it to Facebook, where millions of viewers have been captivated by the unusual and hilarious scene.

“I can’t make this stuff up!!!” she writes in a post along with the video. “So we pull back in our driveway tonight and this is what we see. This is not our dog! But apparently him and Cricket the one eyed wonder pony are best friends. I’m stealing the dog, new circus act!”

Schenker told the Springfield News-Leader that she thinks the dog’s name is Roper. She also said the corgi’s owners are Mennonites who tend to keep to themselves and don’t go online, so they likely have no clue their dog and her pet one-eyed pony, Cricket, are now Internet stars.

Schenker says the response has been “insane” and “overwhelming,” waking up to hundreds of thousands of notifications. As she posted on Facebook:

“The dog is my neighbors’… He randomly shows up. I guess I just caught him riding my [pony] at the perfect time! The dog didn’t get hurt! No the dog is not abused at his home, he just likes to travel the rural area we live. Cricket is fine, he lost his eye [sic]along time ago in an incident that had nothing to do with the dog! I DID not put the dog on the pony! Honestly I was pulling in my drive way from going to McDonalds when I seen this happening. I’m lucky I even got the video because my phone was nearly dead. I didn’t have any intentions of his video being viral. I just post a funny video I thought my friends would enjoy. I’m glad everyone got a good laugh out of this.”

She summed up the post by letting viewers know they’re welcome to join a new page she’s creating called “Cricket and Pals,” where she intends to post more videos and pictures.

“He rode it like people,” Schenker said to Springfield News-Leader. “That, to us, is the killer of the video — that he actually stayed on … I’m really glad everyone got a good laugh out of it — if they got a laugh from the actual dog, or a laugh from my laugh. I’m glad it’s something happy this time instead of something sad in the news.”