Chained Up Rottweiler Dumped For Days Without Foods or Water.

Every animal in this world should have freely and a happy life. It is the right of every animal. But some people think that only humans have the right to live a free and happy life. Some of the things such people do to innocent animals is unbelievable. Thousands of innocent animals around the world face various difficulties every day. that because of such heartless people.

One day a dog was found dumped near Andrew Street in Llanelli. He was tied to a nearby fence and it was difficult for him to even get up on his own. Then rescuers rushed to the spot to take the dog away. But they were completely excited when they saw the condition of the dog. He is a Rottweiler. When they found him he was very thim and full of fleas. No one knows how long he had been tied there. Sometimes he had to endure freezing cold for several nights. 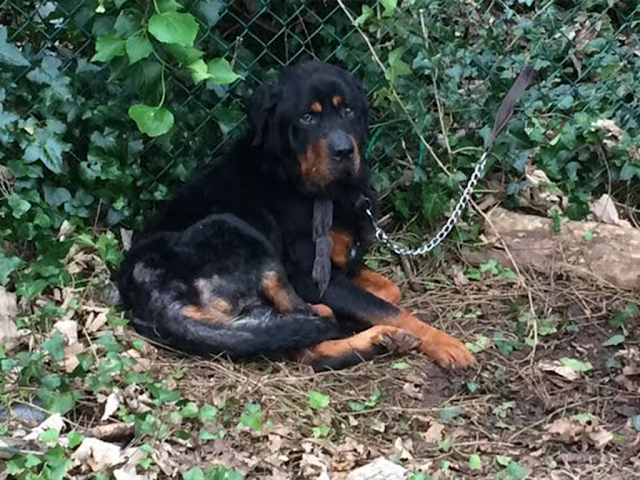 The rescuers rushed him for treatment as soon as possible. There found that the dog had been living without food and water for several days. The place where these rottweilers were tied was very far away from people, so no one had seen him. He had lost lot of hair on his back due to fleas and he had lost a lot of weight. After the treatment, the Rottweiler boy responded very well to the treatment. As a result, his condition improved very quickly and the fleas disappeared completely.

Gradually his coat grew and he became a very strong and healthy dog ​​like other Rottweilers. The dog was in a rescue shelter and will be re-homed when he is fully recovered.