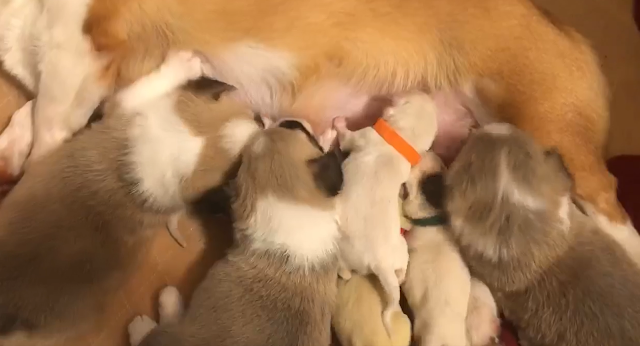 "Most of the time they kind of turn their back on that, but she didn't," Renee Eden of Lone Star Dog Ranch Rescue said of the compassionate corgi

There's nothing quite like a mother's unconditional love — even for dogs!

Earlier this month, a corgi named Angela adopted four Labrador puppies as her own after the newborn babies' mother — a Lab named Autumn Dove — passed away shortly after giving birth.

A few weeks before she took in the Lab quartet, Angela, a 2-year-old canine who arrived at Texas' Lone Star Dog Ranch & Dog Ranch Rescue pregnant after being saved from a puppy mill, gave birth to her own litter of puppies, so she was already in my mom mode when the orphaned Labs arrived.

"We thought we were going to be bottle feeding around the clock," Lone Star's Renee Eden told Fox 4 of the four new additions

"Angela’s puppies were 3 weeks old, so to introduce some newborn puppies to a momma who's got 3-week-old pups can be a little tricky, and most of the time they kind of turn their back on that, but she didn't," she added. "And it was pretty magical."

Lone Star posted about Angela's first meeting with the four orphaned pups on Facebook, sharing that the rescue's staff put one of the newborn Labs next to Angela, and the corgi quickly started nursing the pup, eventually allowing all four pups to nurse.

After the pups were fed, the Labs were put back in an incubator to rest, but Angela became upset and began to bark and jump at the incubator. This caused staff at the rescue to return the Lab pups to Angela, who resumed cleaning and nursing the animals "just like they have been hers the whole time."

On Dec. 6, the rescue updated their followers on how Angela was doing with her new brood, writing that she took "full ownership of them" and that "they sleep with her all night long nursing as much as they would like."

Lone Star added that they were "shocked" that Angela would take to the canines so quickly, given that her pups are "so much older" than the others.

"We could not have been any more blessed with this terrible situation," the organization wrote.

After Angela's mothering is done, and all her puppies (the adopted Labs included) are ready for homes, the corgi has a forever home waiting for her.

"They of course understood and were so proud of their new girl and they will patiently wait for her to raise her Labrador pups," Lone Star wrote of Angela's future family.

According to Fox 4, each of the puppies has been claimed for adoption as well and will head to their new homes once they are old enough to thrive without Angela's help.