Couple are Excited After Pet Rottweiler Swallowed Their Engagement Ring.

Wedding ring is a very precious thing for everyone. Everyone protects their wedding ring like their life. But unexpectedly, when the wedding ring goes missing, everyone is so excite about it. Because there is no substitute for a wedding ring.

Melbourne’s Amanda Davey and Jake Dickinson were also very excited for their engagement ring. One day she discovers that the wedding ring had mysteriously disappeared from Amanda’s finger. Since then, she and her boyfriend, Jake, have searched everywhere for their engagement ring. It is a very precious diamond ring. They couldn’t figure out if someone had taken it or if it had disappeared. Amanda and Jake turned the house upside down to find the ring. But they could not find it. 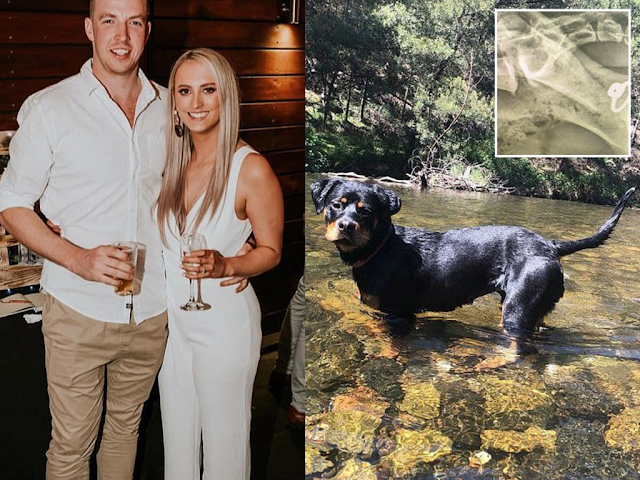 One day she became suspicious of her rottweiler, Millie. So she put another ring on Coffee table to test her behavior to see if she would go for it. Her suspicions were correct. Rottweiler went to that ring. Then started sniffing it. They thought Millie must have swallowed her wedding ring. So they took the dog to a vet as soon as possible. There she rushed to a scan.

The scan revealed that she had swallowed their wedding ring. After several hours of hard work, the ring was taken out. Fortunately, there was no problem with the dog’s life. But they had to wait about four hours untill the dog pass the ring out of her digestive system. Amanda laughed and told the media that she she will be sterilising the ring for two-to-three years.