Some things in our life happens like a miracle. And some things happen with a reason. And we cannot believe the results of some incidents that happen to us in life. Some of the good things we do, we may get the results after a few years. This is such an incident.

The meeting of some dogs and humans is one such miracle. Because some dogs come into our lives for a big reason. Sometimes they are like a gift from God in our life. One day, when a young woman was walking with her partner at night she discovered something unexpected. It was an unusual bundle of rags on the side of the road and they couldn’t figure out what was in it. So they decided to check this unusual bundle of rags. There they found something unexpected. In that bundle of rags was a rottweiler puppy. She was dumped.

A female rottweiler, she was very cute. So they couldn’t let her go. Therefore, without thinking twice they decided to adopt the puppy. Accordingly, they took the puppy home. The next day, the couple took her to the vet. What a luck! She had no any health problems. They couldn’t imagine who could dump such a cute and healthy rottweiler puppy. But she had lost a lot of weight.

But when given nutritious food and good care, he began to grow a very healthy puppy. They named her ,Leeanna. She became a member of the family. She quickly became very close to everyone in the family. But one day something unexpected happened. One day Leeanna’s owner and her partner were watching TV in the living room when their rottweilers started barking loudly. Then she went to the front door of the house and started barking loudly. Later, Leeanna ran to the back door of the house, broke the glass and jumped out. 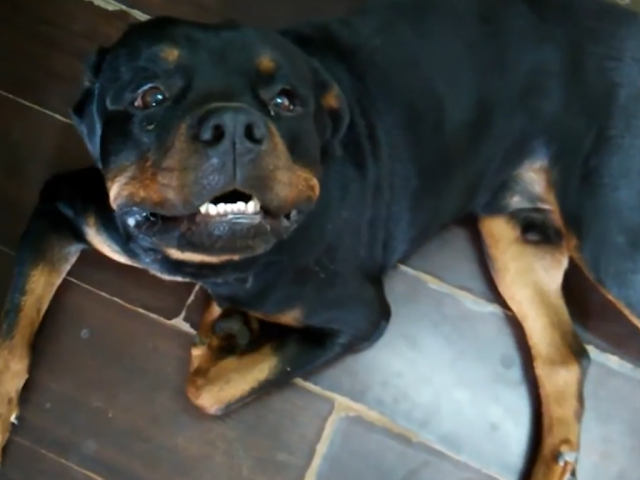 They could not imagine what was happening. They also came out with the dog. There they saw that the dog was holding an unknown man who had entered the garden. He had tried to break into their house and LeAnna’s instincts prevented something big from happening. But it never tried to bite the man. She did not let him escape until officers arrived. So in the end the young couple not only saved the puppy’s life but the puppy also saved their life.