This Teacup piglet's favorite thing to do is to play with her friend, a Doberman Pinscher. When she's not adorably climbing all over the dog, she loves getting groomed and cleaned. 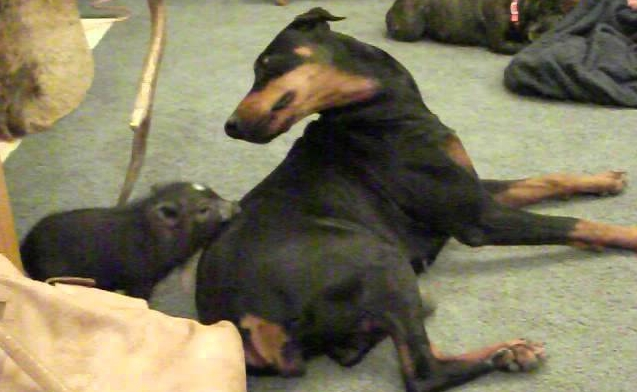 Miniature pigs, also known as micro pigs, pocket pigs, or teacup pigs, have seen an increase in popularity in being kept as pets, especially following Paris Hilton's purchase of one in 2009. They are intelligent animals and can be house-trained. They do not shed and tend to keep themselves clean.

Micro pigs can potentially make great pets, but there are considerably more risks involved when buying a micro pig over other common pets, such as cats or dogs. The biggest concern is that, since there is no established breed of "teacup pig", there is no guarantee that the pig sold as such will actually stay small. The risk of ending up with a large pig can be somewhat minimized by looking at the pig's parents and grandparents if possible

If you’re thinking of adopting a teacup pig, research the laws in your county, town and state to ensure that owning such an animal is even legal. Too many people miss this step, and end up finding themselves in court for the right to keep their teacup pet, even though it clearly violates local zoning laws. All it takes is one nosy neighbor to report you and notify authorities of your unauthorized “livestock.”

A teacup pig is a long-term pet. They outlive dogs. They outlive cats. They won’t outlive you, as a parrot or a tortoise could, but with their lifespan of 15-20 years, you're signing up for a significant commitment.