One day Kaylee Robb, 33, from Dundee, saw an advert on Gumtree about rottweiler puppies. Kaylee is a mother of three. After seeing the advert she and her partner decided to travel to Stranraer to buy a puppy from the breeder. Because she wanted to gift the puppy in time for her son’s birthday. Because all three of her sons are with mental problems. So she wanted to surprise them aged 14,13 and 09.

Also, her partner previously had Rottweilers, they decided that Rottweiler is the most suitable breed for the sons. So Kaylee and her partner Billy drove three hours to Stranraer. But there, the breeder’s behavior was very unusual. The breeder told them it was her first time selling puppies. But the breeder previously said this was her second litter and she had sold other puppies on Facebook. Breeder went into the back of the house and brought out a little puppy.

She handed them the little rottweiler puppy. Accordingly they bought the puppy for £300. She also said she was really busy and asked them to leave. It was a very dark place so they could not even examine the puppy properly. But they realized that the puppy was very small.  When they got into their car the couple were excited to discover that the puppy was very weak and full of fleas. Kaylee contacted the SSPCA as soon as possible and sought veterinary assistance. After taking the puppy to the vet, he said little Rottie was only four weeks old and didn’t have a microchip. 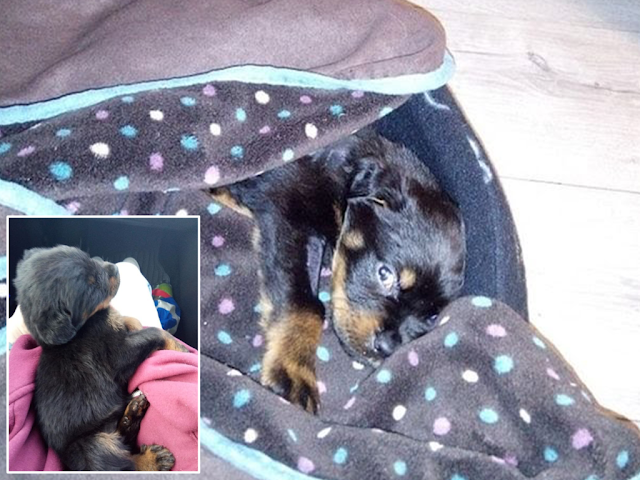 And the vet removed about 300-400 fleas. This little rottweiler named Xena was dehydrated. About a week after the treatment, they were able to take the puppy home and surprise the three sons. But in less than a week, Xena’s health began to fail again. After going for treatment and there found that the puppy have P*rvo. The condition of the puppy was not good at all and the vets decided that Xena will have to be put to sleep in Kylee’s arms.

Kaylee questioned the breeder about the puppy. But received a unbelievable reply message: “Did she survive?”. After three weeks, instead of playing with a puppy, they had to put the puppy down. Finally, the breeder had removed her advert and even closed her Facebook. And when they tried to call her, she did not answer her phone. So be careful when buying puppies from online.