This young Border terrier loves to play with a Friesian horse. I love how the horse wants to give the dog kisses. It's easy to see that these two are great friends!

The Friesian (also Frisian) is a horse breed originating in Friesland, in the Netherlands. Although the breed's conformation resembles that of a light draft horse, Friesians are graceful and nimble for their size. 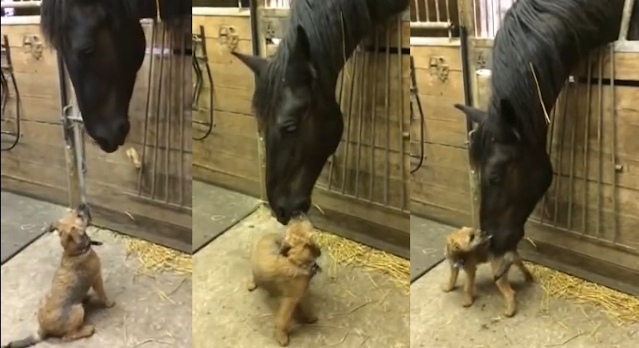 It is believed that during the Middle Ages, ancestors of Friesian horses were in great demand as war horses throughout continental Europe. Through the Early Middle Ages and High Middle Ages, their size enabled them to carry a knight in armor.

In the Late Middle Ages, heavier, draft type animals were needed. Though the breed nearly became extinct on more than one occasion, the modern day Friesian horse is growing in numbers and popularity, used both in harness and under saddle. Most recently, the breed is being introduced to the field of dressage.

The breed owes much of its current popularity to the appearance of the Friesian stallion Goliath (real name: Othello) in the 1985 film, Ladyhawke, which ignited a worldwide interest in these horses.