Hilarious Moment a Rottweiler Gets a Cheeseburger From a Fast Food Drive Thru.

We all have wonderful experiences in our lives. Maybe you don’t remember the first time in your life that you went to McDonald’s restaurant. But some people may remember. For many it is an unforgettable experience. So it’s not just us, there are also pets who like to go to McDonald’s. Just like us, dogs love to eat cheeseburgers. This is a story about such a wonderful dog.

One day a wonderful video on the internet became popular everywhere. According to the video, Mr Ozols, 31, stopped his car at the drive-thru window of a Norlunga McDonald’s, south of Adelaide. There his eight-year-old big rottweiler sticks his head out of the open window of the vehicle. That’s to get his cheeseburger. The McDonald’s worker who came to the window with a cheeseburger was so excited to see his customer. 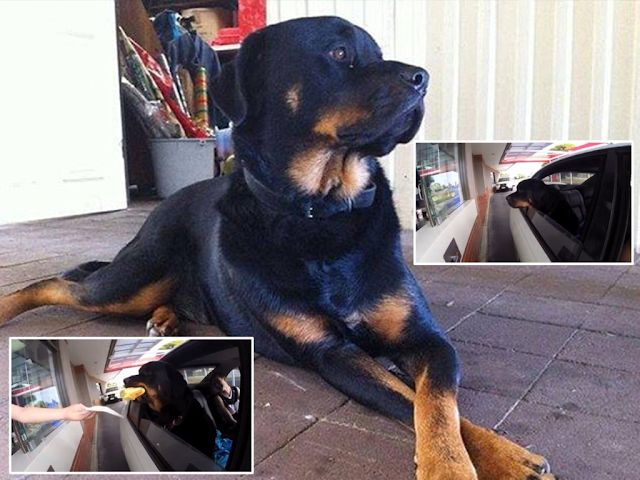 When she saw the dog, at first she refused to approach him. But after Mr Ozols reassures her no problem will come to her, she handed over the burger. Not a second later, Rottweiler started eating cheeseburgers in the back seat of the car. The dog’s owner said he had never experienced this before. And he said they had taken his Rottweiler out for ‘a big day out’ before they made the stop. So the owner decided to give his dog this experience.

Mr. Ozoles said that this Rottweiler named Cultus is a very big giant, but he is a very gentle and loving dog. It was an experience to the dog and the family will never forget.