Hilarious Rottweiler Refuses To Take His Meds So He Plays Lifeless To Avoid Taking It.

If you have kids, you know how difficult it can be to give them to their medicine. So giving their medicine not only to small kids but also to pets is not easy. Dog parents know this all too well. Because dogs are like kids. So dog parents have to use different tricks to give them medicine.

If you are a dog lover, you know how brave and strong a breed Rottweilers are. But no matter how strong and brave they are, they often behave like kids. This is a wonderful example of that. Because of a bone problem, this sweet rottweiler, Brutus, had to take several pills each day. But he doesn’t like taking pills at all. He is very stubborn. Every time his owner tries to give him medicine, he finds some way to refuse it.

But his loving owner tries hard every day to give him medicine. Sometimes he promises his dog that he will take him out to play even if he takes pills. So one day the owner of Brutus had to face an unexpected and funny incident. As usual, he prepared to give medicine to his rottweiler. But Brutus rejected them all. But the owner put all the pills into his mouth with great effort. 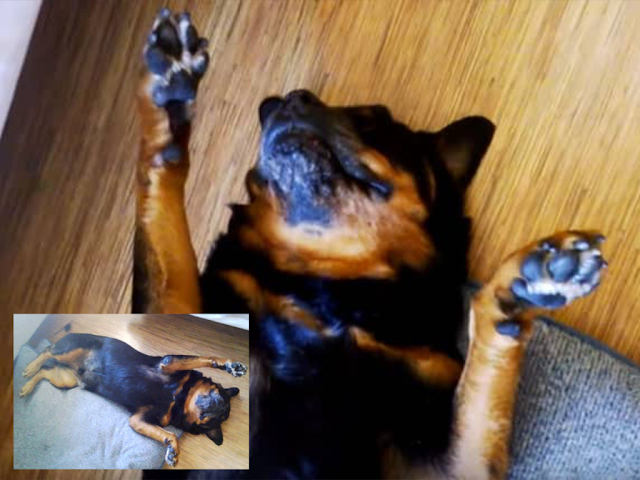 Then he couldn’t believe the trick this mischievous dog used to escape from the owner. The dog was lying motionless on the ground, playing lifeless. He still hasn’t swallowed the pill. They are all still on his tongue. Brutus’ owner couldn’t stop laughing. He took the phone and recorded this wonderful behavior of his rottweiler. Because the owner had never seen such behavior from him. Also, after posting this video on the internet, it became extremely popular everywhere.

When Brutus was adopted by his owner, he was a small puppy. Due to several problems faced at the breeding house, he could not even walk and his life was a dark one until he met his current owner. But due to the efforts and love of this owner, Brutus’ condition improved greatly.