Kangaroo and Dog showing their love for each other (Video)

They might look very different but Blue and Trooper clearly believe they are from the same pack. 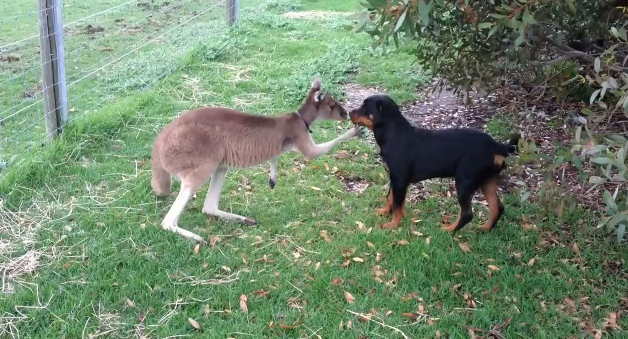 The Rottweiler puppy and kangaroo were filmed having a tumble at their home in Perth on Thursday.

Their owner, Ed Trindall, who filmed the encounter, said that the two creatures have a developing 'relationship'.

'Blue the roo and Trooper my rotty pup, best of friends. This video I would like to share with you as it shows an amazing relationship between two species. I hope you enjoy it,' he wrote in the video’s description.

The video certainly does exhibit a blossoming friendship between the two companions, as they bounce around together.

At first, Blue is seen teasing the young pup by mussing up his black fur. Trying to get his own back, Trooper nips at the kangaroo’s arms while his tail is clearly seen wagging playfully.