Little Girl with Rare Disease and Her Service Dog Have a Special Friendship: 'I Pretty Much Love Everything About Him'

"He's always there for me," says Bella Burton, 11, of her service dog, George. Bella has Morquio Syndrome, a progressive genetic disease that makes it hard to walk 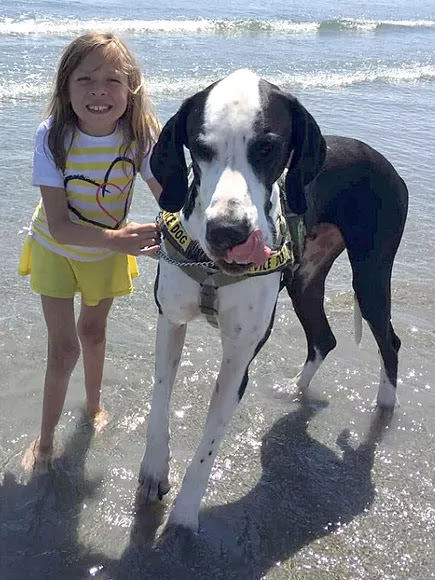 This past summer, Bella Burton, 11, was riding a bike and walking on her own for the first time – thanks to a lot of help from her best friend and adorable service dog George, a 137-pound Great Dane.

Burton, a Woburn, Massachusetts, sixth-grader, has Morquio Syndrome, a rare inherited metabolic disorder that was diagnosed when she was 2.

The progressive genetic disease can lead to abnormal bone development and dwarfism, and make it hard to walk. Bella, just 42 inches tall, is not expected to grow much more, her mother, Rachel, tells PEOPLE.

Until Bella got George 20 months ago, she had to rely on crutches and a wheelchair to get around. Then Bella learned to lean on George, a fun activity that’s also strengthened her legs.

“We never thought she would be off crutches. And now she will go in the yard and play, even without George,” Rachel says. “To see how much stronger she’s gotten is awesome.”

Adds Bella, “I pretty much love everything about him.”

Since Bella’s gotten George – who attends classes with her – she’s also been happier.

• Need a little inspiration? Click here to subscribe to the Daily Smile Newsletter for uplifting, feel-good stories that brighten up your inbox.

“He’s always there for me,” she says, “and whenever I’m feeling sad or something, he’s always there. He knows, he just kind of comes over and leans over me.”

Bella and George’s love for each other and their adventures are followed by more than 20,000 fans on their Facebook page.

Bella, who loves to swim, even got the water-shy George to enjoy boat rides and romps in the ocean this past summer.

George joined Bella’s family on January 19, 2015 from the Ipswich, MA-based Service Dog Project, which trained the gigantic pooch. The group has donated over 100 Great Danes to people with severe balance issues, according to its website.

“Bella came her and spent a lot of time at the farm and she’d go in with all the dogs on the property and no one would give her the time of day,” Megan Kokaras, a head trainer at the Service Dog Project, tells PEOPLE.

“She stumbled upon George and there was an instant connection,” she says. “She climbed into his loft [where he sleeps] and he put his paw on her leg and didn’t want her to leave.

“It was instant. George said, ‘This is my person’ and we ran with it from there. They were made for each other.”

After Bella began receiving a weekly infusion of an enzyme replacement therapy at Boston Children’s Hospital in June 2014, George was at her side. (She now receives the infusions at home, says Rachel.)

George has also accompanied Bella for two recent short overnight hospital stays, and as dogs are apt to do, climbed into bed with her. On October 14, Bella returns to the hospital for reconstructive surgery on her right foot. George will be with her.

“Bella was never really shy, but he’s given her more confidence,” Rachel says. “She feels she fits in better with her peers than when she was on crutches or a wheelchair. She feels more confident about herself.

“Now that she has George, she feels more like a regular kid.”