Missing Rottweiler Found With a Cable Deeply Embedded Around Her Leg.

Some people have no kindness and love in their hearts. They do not know what kindness and love are. Because of such people, animals have to face unbelievable hardships every day. That is why the population of street animals is increasing day by day in every country.

Rottweiler is a breed that every dog ​​lover dreams of adopting. And because they are so expensive, adopting a Rottweiler is just a dream for some people. But someones don’t value them at all. So they dumps even such excellent breeds on the streets. This is an emotional story of such a dog.

A dumped dog was found near Cutting Edge Glass on Morgantown Road. The most touching, heartwarming thing is that a cable is wrapped around her leg. it is so tied that the leg is almost severed. The cable was deeply embedded in the dog’s skin. She is a Rottweiler. Investigator Karen Ewing of the Adams County Sheriff’s Office said it appeared to have been done deliberately. But no one knows what caused the cable to be tied so tightly around her leg. But it embedded her leg very deeply. 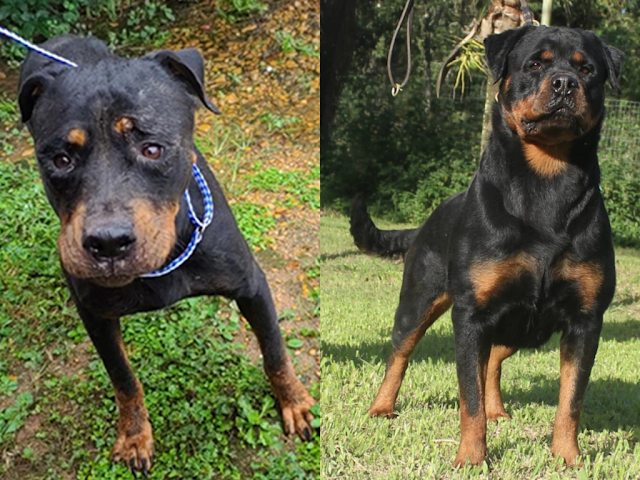 Shannon Wilson of Cutting Edge Glass said the rottweiler was roaming around her shop with another dog. She fed them daily. But the dog never would let her get close to pet her. But Wilson always thought he have a Rottweiler. She is a very sweet dog. Wilson fed and cared her for about a year. But one day she was missing and was not seen for about a month. About a month later, she saw the dog again.

But Wilson quickly called the sheriff’s office after noticing that her leg was tied very tightly with a cable. Dog was then taken to Tracy Peltier at Southside Veterinary Center. And they said that the leg would have to be remove to save her life. No one really knows what happened to the dog. And no one knows where she was for about a month.