They have a fearsome reputation, but one Rottweiler is proving that the breed has a softer side by helping to rear two lambs. 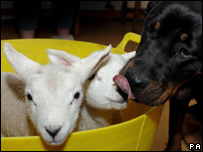 Molly has been using her maternal instincts after lambs Lucky and Charm were born with complications on a farm.

Her owner Maria Foster, 38, from Forden, near Welshpool in Powys, said Molly slept with the pair at night, and even protected them from other animals.

Lucky and Charm are recovering and will be placed in a field in about 10 days.

Ms Foster said the pair needed help to improve their circulation soon after they were born.

They were placed in an Aga oven for warmth and after being lifted out Molly took over and started licking them as a ewe would have done.

"The first 12 to 24 hours for a lamb are absolutely crucial and if Molly hadn't been doing what she was doing, I would have had to have been there rubbing the lambs through most of the night to keep their circulation going," said Ms Foster.

"She could have ignored them but she didn't and it is quite comical to see."

Now 11-month-old Molly is like a mother to the two lambs, who stick closely to their unlikely guardian. 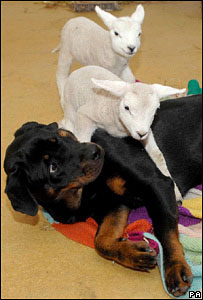 Ms Foster added: "The cat came into the kitchen the other day and walked over to the bucket where the lambs were sleeping, but Molly pushed her away as if to say: 'They are mine.'

"She will let the sheepdog have a look, but only for so long before she pushes him away as well."

Ms Foster said they cannot be returned to their mother because they would be rejected by her after so long apart.

A spokesman for the Kennel Club, which organises Crufts, said: "Rottweilers were originally bred as guard dogs in Germany, but in the right hands they should not pose a problem.

"They are not born aggressive, they learn it from us.

"Nonetheless, it's certainly the first time I've ever heard of a Rottweiler caring for lambs."