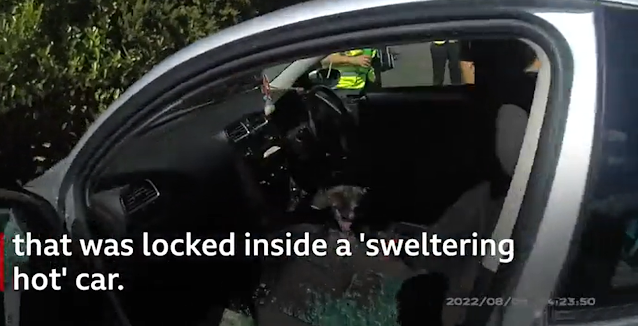 Bodycam footage has been released showing the moment a police officer broke into a "sweltering hot" car to rescue a small dog.

The Shih Tzu was found barking and panting inside the locked car at the Wilkinson Street park and ride in Nottingham on Monday, police said.

Although the windows of the car were left "slightly open", the dog had collapsed in the heat.

Officers took the animal to a nearby vet, and it is now making a "good recovery".

The dog's owner has been invited to attend a police interview and the case has been referred to the RSPCA, Nottinghamshire Police added.

Police have the authority to break a car window to rescue a dog in distress under Section 18 of the Animal Welfare Act.

"Many people think it's OK to leave their dog in the car on a warm day providing the windows are open. But this incident shows that just simply isn't the case," PC Jamie Martin said.