One Pet Parent Speaks Out About Dog Modesty 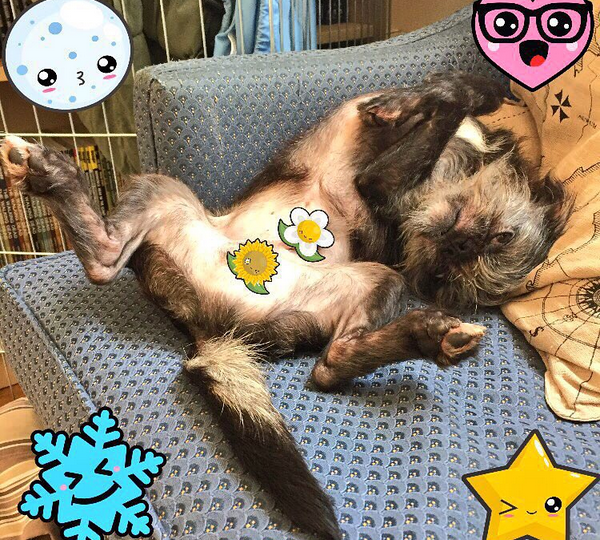 Becoming a first-time pet parent comes with a host of challenges: how much should you feed him? Should you let him sleep in the bed? What’s the deal with crate training, anyhow?

For writer, podcaster, teacher, and brand new dog parent Jaime Green, there was one more challenge: getting used to her dog’s you-know-what.

“It makes me feel so immature,” Jaime says, “but I do notice dog penises.”

For new dog parents, there’s a first time for everything 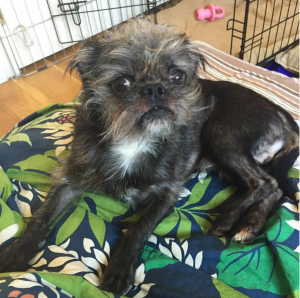 Jaime and her husband Tanner adopted Hercules Mulligan, a Brussels Griffon/shih tzu mix, from a shelter in upstate New York. Herc came from a humane law intervention situation where he was kept in a house with 12 other dogs and didn’t see much of the outside world.

“I doubt he was walked at all,” Jaime says of Herc’s life before he found them, “and definitely not on a city street.” Now that he lives in Brookyn, Hercules is still learning how to deal with leashes (not to mention the family cat). Training is a gradual, at times frustrating process, but the frustrations are offset by Herc’ sweet, snuggly nature and award-worthy face.

With a face like that, Hercules Mulligan could be an Instagram star. But when Jaime started sharing photos of him, she realized just how visible his other, more intimate parts were. Herc spends a lot of time rolled over on his back, legs spread wide, tummy and everything else on full display.

A funny solution to an awkward distraction 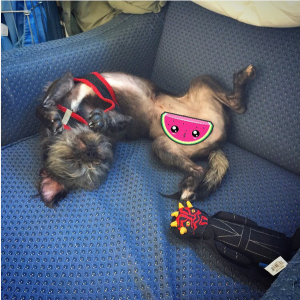 “Hercules is pretty bald around his junk,” Jaime explains, “and his coloring…emphasizes his anatomy.” It’s not that there’s anything embarrassing or shameful about dog genitals, just that, well, sometimes they’re so unavoidably there. In a flash of inspiration, Jaime used a sticker app to cover Hercules Mulligan’s most distracting appendage.

It turns out Jaime isn’t the first dog person to come up with a way to playfully “censor” photos of her dog. Just search Instagram for the hashtags #dogmodesty or #modestdog, and you’ll find a wealth of examples.

Sometimes, dog modesty is as simple as a well-placed sticker: 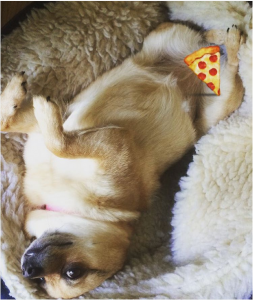 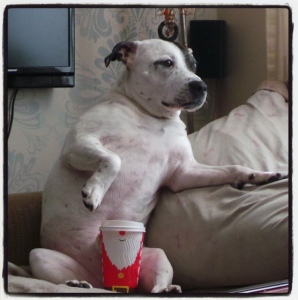 Other times, a strategic pose works to block out the potentially-offending part of a modest dog: 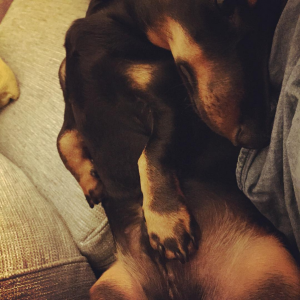 Of course, it’s unlikely anyone will actually be offended by dog anatomy on display, but immature or not, we’re all going to notice it. Stickers, paws, and carefully-placed props are a playful way to call out and acknowledge the distraction without making too big a deal out of it. After all, dog junk is as natural as any other junk. As Jaime points out, “Joking makes it feel okay to look, which makes it feel less weird.” 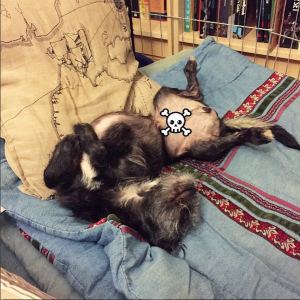 The appeal of #modestdog modifications is simple: “They amuse me and make me happy,” Jaime says.

For a first-time dog guardian, maintaining a sense of humor is key. A jokey exchange with a fellow dog fan on Instragram can help alleviate the frustration of a training walk, and sharing a hilarious picture of your dog can help you laugh off yet another mysterious puddle next to the couch.

I asked Jaime if she finds herself wanting to post a lot more cute pet pics now that she has a fav-ready dog.

“Actually the opposite,” she says. “I’m worried about overdoing it.”

While Jaime’s restraint is admirable, based on Herc’s growing fanbase, I don’t think she has anything to worry about. There’s no such thing as “overdoing it” with Hercules Mulligan, junk and all.