The Fantastic Five seems like a good nickname for the dogs that scared a would-be intruder away from Jen Merrill’s home this week. 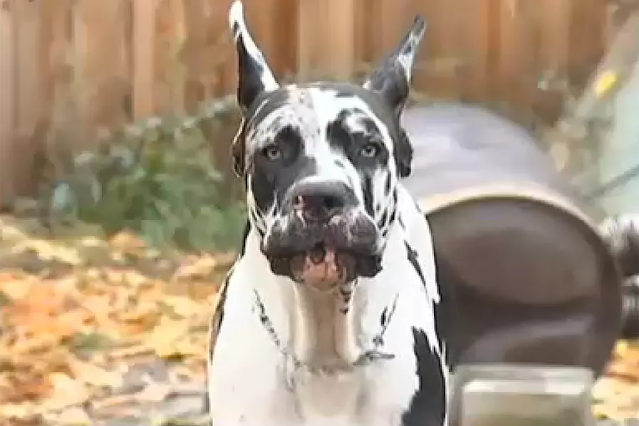 The Portland, Oregon, mother spotted a man jumping a fence in her yard on Monday while she was home alone with her two kids, KPTV reports, and she credits the canines with saving her life.

Merrill has two Great Danes, an American bulldog-Great Dane mix and a malamute, and was dog-sitting a German shepherd that day. The story said the man was caught on a home surveillance camera jumping two 6-ft. fences in Merrill’s backyard, when the group of pooches sounded the alarm and got between her and the would-be intruder.

“I heard my other dog downstairs going crazy unlike I’ve ever heard before,” Merrill told KPTV, adding that the man mumbled, waved her off and kept walking around a trampoline.

Later, Merrill said he jumped into a window well and tried getting into her house through the basement.

“I put the kids into the garage and I locked the door up here so they were locked inside and then I told the dogs, ‘Go get him,’ you know?” she said.

“My dogs saved my life,” she added.

The dogs apparently went for the man as he took off in the direction of a neighbor’s yard (police have not identified the man, described as a 5-ft., 5-in., tall caucasian male in his early 20s).

“Loud dogs, big dogs and a camera system and he still pursued it,” Merrill told KPTV. “That’s the scariest part for me.”