Owner Saves Her Rottweiler After Getting His Collar Caught In The Elevator Door and is Dragged Up.

Being a pet owner is not as easy as we think. Because when you adopt a pet, you have to be careful about them. Because they are like little children. They can get stuck in any problem at any moment. Therefore, it is the pet owner’s responsibility to keep an eye on them. Sometimes even the smallest thing can end the life of our beloved pets. This is an incredible example of that.

Tamara Seibert is a loving owner of two dogs. She was a student at Ryerson University and she loved her dogs very much. She took care of them as her own kids. She and her dogs often use the elevator in her building. It is very normal for her and her dogs. Therefore, her dogs even know how to ride in an elevator very well. So one day she entered the elevator to the ground floor of her building with the two dogs.

But in the next few seconds, they had to face something totally unexpected. She brought her dogs into the elevator, where her Rottweiler’s leash got caught in the elevator door. Tamara did not see it. Meanwhile the elevator started to descend and Rottweiler was lifted into the air by his collar. Everything happened very quickly. She couldn’t think of what to do. She tried to pull down the dog’s from his collar. And she quickly pushed the buttons of the elevator door to open it. She tried her best to ripped at her dog’s metal collar. 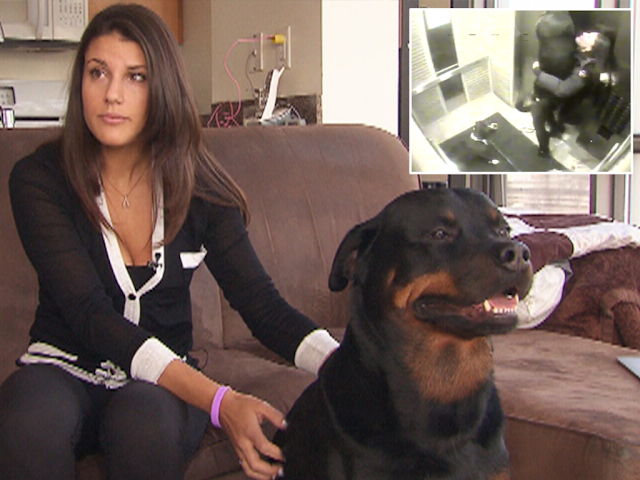 It was not easy for her to hold the dog. Because he is a very large rottweiler weighing around 110lb. But she did not give up her dog. The dog hanging for approximately 30 seconds and then the door opened. The dog fell to the ground. She somehow saved her dog’s life, and the skin on her hands was torn open by the dog’s metal collar. But she endured it all. Tamara helped her two pets out of the elevator with cradling one hand in the other.

The video was quickly became popular everywhere after it releasing on the Internet. Everyone who watched it said that Tamara’s brave act saved the dog’s life.