A puppy has had a life-saving operation after swallowing a hook still attached to a fish he had eaten. 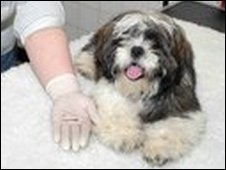 Four-month old Shih-tzu Oscar was on a walk on the dockside in Plymouth, Devon with his owner when he swallowed a mackerel discarded on the quayside.

He was taken to the city's PDSA animal charity hospital where x-rays showed the hook had lodged in his throat.

Vets performed emergency surgery to remove the hook from Oscar's throat and the dog is recovering well. 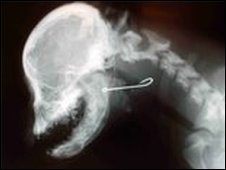 Vet Lily Cross described the surgery, which took over an hour, as a "delicate procedure".

She said: "It was very much a race against time to prevent the hook travelling further and causing more problems."

Oscar was given the all-clear shortly after surgery and sent home the same day.

Owner Louise Northcott said: "I am extremely grateful to PDSA for saving Oscar's life. It is still frightening to think how it happened in a matter of seconds.

"He is my first ever pet and I have realised from this how important his safety is."

PDSA is encouraging dog owners to be more aware of dangers when walking, particularly in areas such as the beach or dockside areas.