Every dog ​​breed has its own unique talents. Rottweilers have been a very smart breed for caring since ancient time. During the Roman Empire, they were used as guard dogs. Also, they have been used in the past to take care of cattle herds. Because they have a highly developed instinct for that. Rottweilers are a best breed for protection.

So not only in the past but also in the present they are very good for taking care of animals. Oliver is a puppy who was dumped in London’s Hyde Park when he was three-months-old. When he was found, he had lost his sight. Maybe the breeders dumped him because of that problem. Because puppies with such problems cannot be sell to customers. Then the puppy was taken by Battersea Dogs and Cats Home.

There he got lots of love and the shelter staff named him Oliver Twist. They gave him that name due to his cheeky habit of always demanding ‘more’ after meals. The beginning of his life was really difficult. But in 2020, Oliver started a new life with a foster family in South East London. Although he lost his eyesight, he learned everything very well like other dogs. He quickly became a gentle giant.

In the meantime, the volunteers found two more motherless puppies. These two puppies, named Peter and Chris, were rejected by their mom at birth. But when Oliver met these puppies, he started caring for them as his own. Although he could not see anything, he warmed the little puppies by licking them like a mother. Oliver became an excellent foster father to those two little puppies. He started playing very gently with the puppies. 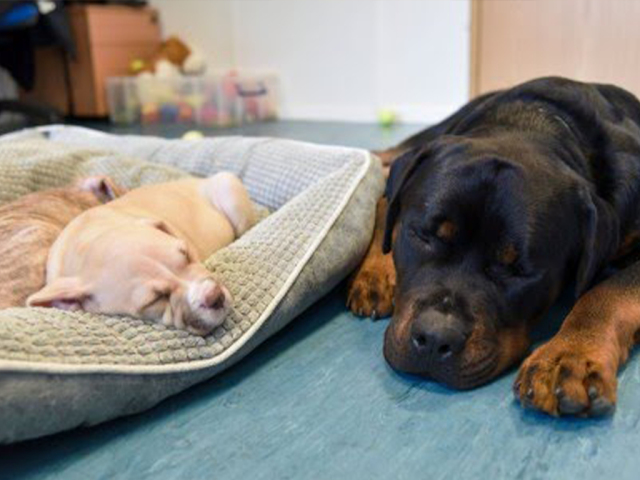 Oliver took very good care of the little puppies. They slept together. Ate together. Oliver cared for them whole day. It is really difficult to expect such a gentle behavior from a Rottweiler. But thanks to his warmth and care, the little puppies grew up very healthy and active. Actually he made an excellent foster dad to two puppies. Oliver finally had a loving forever family in time for Christmas.

He received great love from his new owner, Suzanne, and in his new home, this Rottweiler boy also got a big sister, Izzy. With her help, he quickly learned all about the new home. They spent the whole day together. It really seemed that a wonderful brotherhood was developing between them.