Reward offer over theft of puppy from garden in Surrey

A reward is being offered by the owners of a Rottweiler puppy which was stolen from a garden in Surrey. 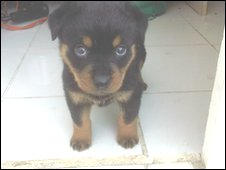 The black and brown dog, who is about eight weeks old and called Ace, was taken from a property in Thorpe Lea Road, Egham, on 1 May.

Police said the suspects forced open a wooden door to the garden between 2200 and 2226 BST.

The reward is being offered for anyone providing information which leads to the conviction of those responsible.

Pc Michelle Carnie said: "The dog was a pedigree breed and no other items were taken during the incident, which would suggest this was a calculated and planned offence rather than a more opportunistic crime."