Rottweiler Carries The Owner’s Handbag From The Bank. He is Like A Bodyguard

We have heard that the dog is man’s most trusted friend in the world. It proves by dogs from again and again. Rottweiler dogs are the main ones among them. They are very loyal to human. If we give a proper training for them, they do anything very well. The Rottweiler is a very intelligent, strong dog breed that can follow any command. They come forward at any moment for the protection of their owner without thinking about their own life.

Rottweiler dogs are well known for their loyalty and protection for their owners. So look, this is a one of the most wonderful story about a dog. This dog became extremely popular all over the world because of what he did in the city.

The dog was actually following the woman. This amazing incident happened in Bukit Bintang, Malaysia. The dog act like the woman’s bodyguard. Snatching people’s bags and wallets by gangs coming from motorcycles is a very common thing in Malaysia. So maybe this woman is walking with her dog for safety. However, as the video became extremely popular around the world, many people commented on it. Those comments were varied. 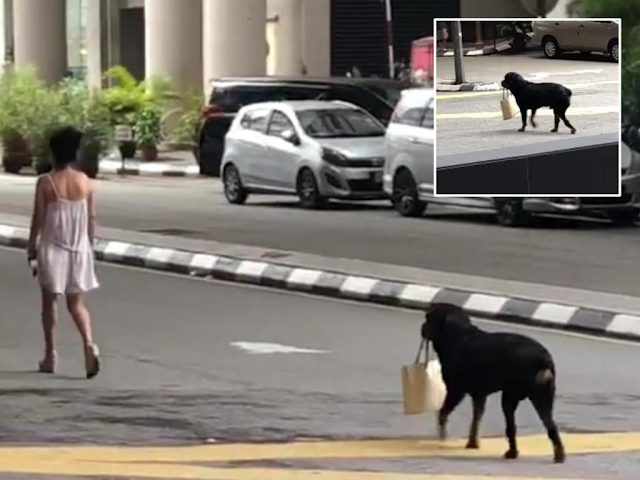 Some people said that it is not appropriate to use a dog for something like this. Others said that it is adorable. However, Rottweilers were used as guard dogs since the past. In the past, they were used to care for cattle. During the time of the Roman Empire, they were used as guard dogs when carrying money. They are still used today as a guard dog for the security units. They have an innate ability for those things. They are very strong. They are very intelligent. Raising a Rottweiler dog for the safety for a woman who living alone is a truly wise decision.