Rottweiler Refuses To Leave His Brother’s Side After He Closed Eyes Forever.

These are Brutus and Hank, the two rottweiler dogs are such brothers. Their owner, Mr. Brett Bennett of Seattle, adopted these two puppies from the same litter several years ago. So they lived together since childhood. A very strong bond developed between the two puppies. No one could separate them. These two dogs were the only ones in Mr. Brett’s family. He loved the two dogs immensely and the dogs loved him very much. And they protected their owner as best as of their ability.

They really lived very happily. They had no problem. But one day all this began to end. Mr. Brett lost his home in Seattle. It was really unexpected. As a result, he and his dogs had to live homeless on the road and in cars. In fact, that life was not easy at all. So he launched an online fundraiser to find a place to live with his dogs. But a few weeks after starting it, his beloved dog, Hank, left them forever. 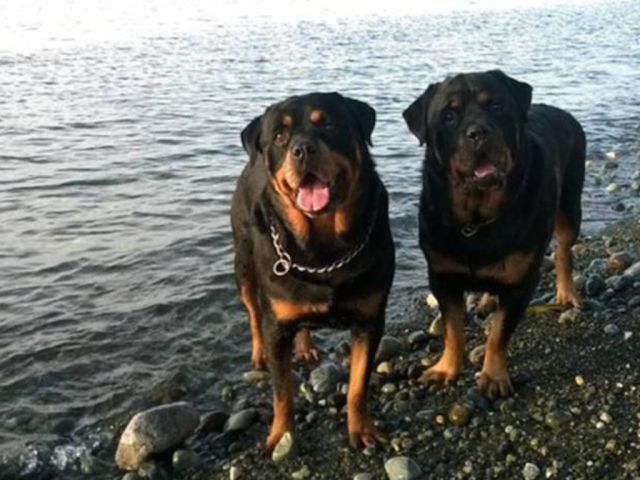 They never expected such a thing. Therefore, Mr. Brett and Brutus could not bear it. Brutus in particular could not bear this at all. Because he loved his brother very much. He couldn’t believe that Hank had closed his eyes forever.

So he didn’t want to say good bye to him. Brutus fell asleep on top of his brother. His eyes clearly showed how much this incident had broken his heart. His eyes were completely wet. Mr. Brett filmed this emotional moment and released it on the Internet, and it quickly became popular.