Three pedigree dogs with badly matted coats have been found wandering around a town in north Wales. 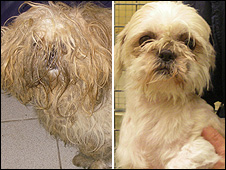 A male and female Lhasa Apso or Shih Tzu dogs were found in a derelict building on 11 November, at Llanrwst Road, Conwy.

Another female was picked up by the dog warden later in the same week at Sychnant Pass, Conwy.

Inspector Kevin Paton said all dogs were in pain because of the matted condition of their coats.

The dog is black and white and the two females cream and white. 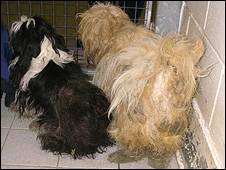 "I am hoping the public will be able to tell me where these dogs came from," said Mr Paton.

"They were not friendly when we first brought them into the centre but this was simply because they were in pain from the mats.

"Once shaved they became totally different dogs with lovely natures."

Mr Paton said he thought it was no coincidence that they were found in Conwy in the same week.

"I believe they have been living together," he said.

Mr Paton added that none of the dogs were wearing collars nor were they micro chipped.

"I would urge anyone who can help with my enquiries to please get in touch so we can solve the mystery of where these dogs came from.

"There could be more of them that need our help," he added.