The mayor of a small town in Texas has resigned after secretly keeping her neighbour's Shih Tzu while pretending it had died. 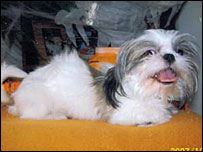 Neighbours had asked Alice Mayor Grace Saenz-Lopez to look after the dog, Puddles, during a holiday. She called them to say it was dead.

But the dog, which Ms Saenz-Lopez had renamed Panchito, was later seen at a dog groomer's and at her sister's home.

A custody hearing on Monday is expected to decide who keeps the pet.

Ms Saenz-Lopez had filed a police report to say that Puddles was missing.

She was indicted on 18 January on two counts of tampering with evidence and concealing evidence.

In a resignation letter published by the Alice Echo-News Journal Ms Saenz-Lopez apologised for the incident.

"I can tell you that I did at the time what I thought was best for Panchito and what I felt was right in my heart," she wrote.

"I am sorry for the division that the events of these last few weeks have caused.

"It was never my intent to bring any negative exposure to our city."