The Hero Rottweiler Who Saved 37 Human Lives From Flood.

Every dog is a superhero. But some dogs have incredible heroic stories. There are many such heroic dogs in history. But you may have never heard of a rottweiler who saved 37 human lives. This is the wonderful story.

The Vargas flood of 1999 was the biggest natural problem Venezuela had to face since the 1812 earthquake. The pilot who experienced the incident, Mauricio Perez, is a loving owner of several dogs. That day, he shared his home with his family, their two Rottweiler dogs, Alpha and Orion, and their five puppies, a cat, and a few others. In November 1999, Vargas County received unprecedented rainfall and December 15 and 16 reached its peak.

On the night of December 15th, a huge snowstorm swept through their area. The behavior of their rottweiler, Orion, was also very unusual that afternoon, and perhaps he had sensed this earlier. Meanwhile, Perez went to the terrace of the house with his family and pets for safety. There was no change in the weather until the next morning. It continued to rain nonstop.

Rescue teams came to rescue them the next day but were couldn’t to take the dogs. So they also decided to stay on the terrace with the dogs. Meanwhile, their rottweiler, Orion, ran across the terrace and jumped into deep water at once. No one could figure out why. Everyone was so excited. The dog swam straight to a girl who was barely holding a log in the water. The dog was safely held by her arm and dragged her to a safe place. She is an eight-year-old little girl. Everyone was amazed to see how Orion rescued the girl. 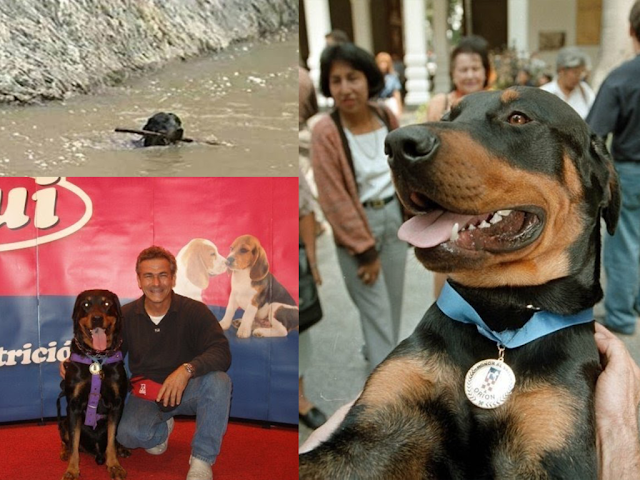 His heroism did not end there. A few minutes later he jumped back into the flood water. There he rescued another 14-year-old girl who was being swept away by the water. No one could stop him. Heroic Rottweiler continued to rescue people who stuck in the water. He contacted with the rescue teams for that. In the end, the family did not get any information about him.

After about two days all was better. But they still didn’t get any information about Orion.

Meanwhile, a radio report said about a rottweiler who saved 37 human lives. But at first Perez didn’t think that it was his Rottweiler. But the neighbors also started talking about Orion’s heroic deed.

No one could believe his heroic deed. He became so popular that he was invited to appear on many television shows. Moreover,  was even awarded the Medal to Valor. He was also honored by several non-governmental organizations. About 8 years after this heroism, in 2008, heroic Orion closed his eyes forever.