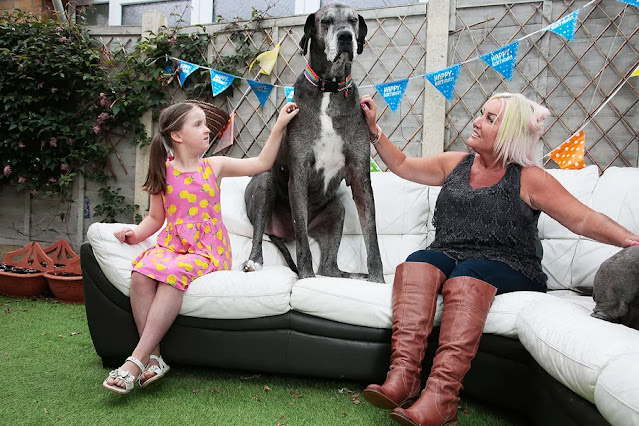 Freddy is used to being top dog.

According to the New York Post, the Great Dane was crowned the world's tallest living dog by Guinness World Records in 2017 for reaching 3 feet and 4.75 inches when standing on all four paws — he is over 7 feet tall while standing on his hind legs.

Now, Freddy has added another title to his resume, on May 17 he became the oldest living Great Dane dog, turning 8 years old. The towering canine celebrated his birthday at his U.K. home in Weeting, Norfolk with his owner Claire Stoneman, his dog sister Fleur (who is minutes younger than Freddy), and a special friend: Stoneman's seven-year-old neighbor Erin Manley.

"Freddy and Fleur had a great birthday party and they both had the best time. We decorated the garden and they got loads of their favorite treats and cuddly toys," Stoneman told Caters about the celebration.

The party was also special for Erin, who was used to seeing Freddy almost every day before the U.K.'s coronavirus (COVID-19) lockdown.

"Erin has never known life without Freddy. She isn’t [fazed] by his height at all and has always been close to him," Erin's dad, Peter, said of the duo.

Aside from hanging out with Erin and his sister Fleur, Freddy's day usually consists of eating ... a lot. The massive dog, who weighs around 210 pounds, has a d.i.et that costs his owner around $630 a month.

Guinness World Records has confirmed that Freddy is the oldest Great Dane that they have on record, reports the New York Post, and Stoneman plans on applying for the official record in the near future.