A dog had to undergo a three-hour operation after eating 30 PPE gloves. 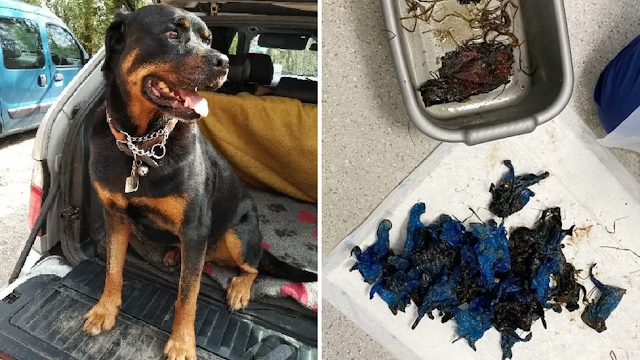 Rambo the Rottweiler was taken to see vets in Wakefield by his owner Darren Coyne after he was sick and brought up one of the gloves.

The dog was referred for an endoscopy in Leeds where vets removed a further 29 gloves during the procedure.

Mr Coyne, who kept a box of gloves in his car for work, said Rambo must have eaten them while travelling to and from walks.

Keith Leonard, who carried out the operation, said though Rambo arrived "seemingly without a care in the world" Mr Coyne's quick thinking had "saved his life".

"Each time we pulled a glove out, we went back to check it was the last one and found another one, it was something we've never seen or heard of before," he said.

"While Rambo was outwardly in a healthy condition, it wouldn't have taken much for his situation to have turned critical and his owner's quick thinking to bring him in to the practice and then our hospital, effectively saved his life."

Mr Coyne, who works at the Holiday Inn in Leeds, said he believed Rambo must have been secretly eating the gloves in the car.

"I had a number of boxes of gloves and just assumed I'd used all of one box, which is why Rambo got away with eating and hiding them," he said.

"When he was sick with one glove I instantly recognised it and searched the car for any evidence of him eating anything else.

"That was when I found the box hidden underneath his bed and the missing gloves.

"I can't thank [the vets] enough for how they helped Rambo, particularly as he seemed to be his normal self and oblivious to the dangerous situation he was in."

Rambo was discharged from the Vets4Pets hospital in Leeds less then 12 hours after arriving and has since made a full recovery.