Wild Cobra Protects Two Puppies For 2 Days After They Fell Into Deep Well.

We often hear about various incidents about the animal world. Some of those events are really unbelievable. Many people do not even believe that it actually happened. Because such incidents are truly amazing. Today we are telling you a story about such an amazing incident in the animal world. This is an incident that excited the entire internet a few years ago.

One day a dog owner in the Indian state of Punjab found his two puppies were missing. The family searched everywhere for the two puppies. But they could not find any detail. About 48 hours later, a man heard the loud, nonstop barking of an elderly dog. When he checked what the sound was,the man saw a deep pit and the old dog was barking to the well.Therefore, he also checked the well. Because he realized that something happened wrong. There he saw two small puppies fell into the deep pit. 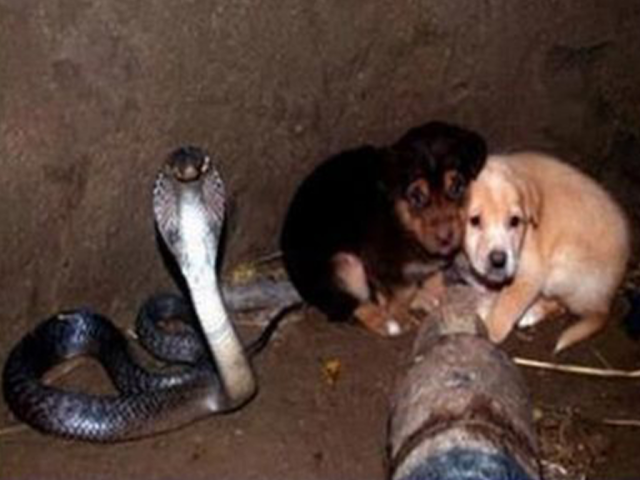 There was really no way for them to get out of that pit. But surprisingly, the two puppies were not alone in the pit. There was also a big king cobra inside it.The mother dog barked repeatedly. As if requesting to save her pups. But surprisingly the puppies had no problem from the big cobra. The cobra was never aggressive towards the little puppies. The cobra was very quiet in a corner.

After the rescuers arrived at the scene, the puppies were got out as soon as possible and the two puppies were completely healthy. It is reported that this snake protected the pups in the well for more than 48 hours. Even when rescuers arrived, the cobra never reacted aggressively. Finally they released the cobra into the forest.