Ever since she was two and a half, Bella Burton was diagnosed with Moquilo syndrome, a rare genetic condition that makes walking, riding bikes and playing a physical struggle. Now 11, Burton is getting around just like other healthy kids her age — thanks to a 131-pound Great Dane named George. 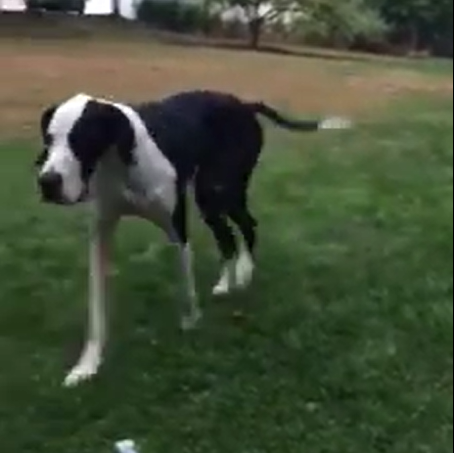 Burton met George a year ago through the Service Dog Project, an organization in Ipswich, Massachussetts that trains and donates Great Danes for people with mobility difficulties. Now, the two are inseparable — she leans on his frame to steady herself, holding onto the harness on his back, which helps her navigate the halls of her elementary school. During lunch time or in class, George sits patiently by her feet, resting until it’s time to help again.

“I had wheelchairs, walkers, Canadian crutches, regular crutches, and then we got George and I dropped my crutches and started to use him,” Burton told WCVB last year, when her story first started gaining national attention.

Burton’s mother, Rachel, has been in awe of her daughter’s transformation.

“I don’t remember the last time I watched my child run through the yard,” she told Today. “Seeing her run was amazing to us.”

In addition to supporting her physically, George provides excellent emotional support during Burton’s various medical appointments, which includes a weekly, six-hour infusion of medicine to treat her condition.

“At first, he did not like it when she would get her IV put in. He would want to get up and protect her. But then he realized it had to be done,” her mom told Today.

George will be honored at the American Kennel Club in Orlando, Florida next month for his service to the Burtons.