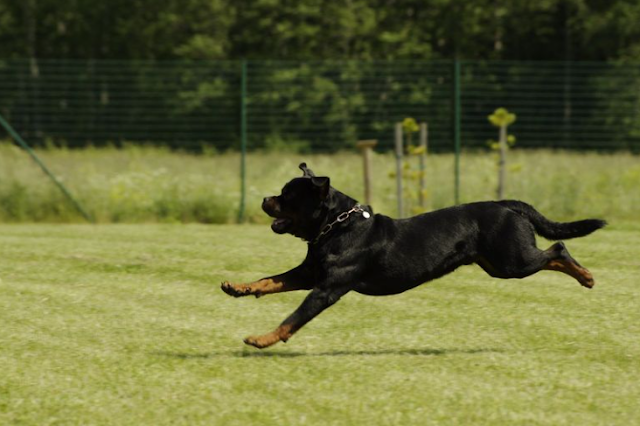 When a Rottweiler found a tiny bunny in his yard, he decided to pounce. But after making a run towards the helpless rabbit, the tables somehow turned. All of a sudden it appeared that the bunny had the upper hand against the daunting doggie. 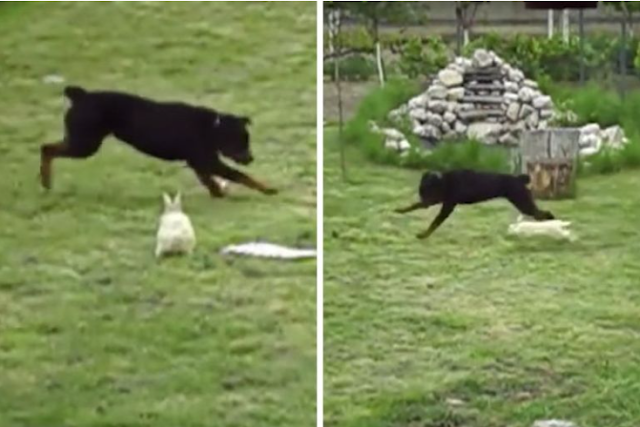 Rottweilers have one of the most fearsome reputations of all dogs. The breed was first established in Roman times, when they were used to guard cattle. However, the reliable canine soon evolved into a general helper for ancient tradesman. 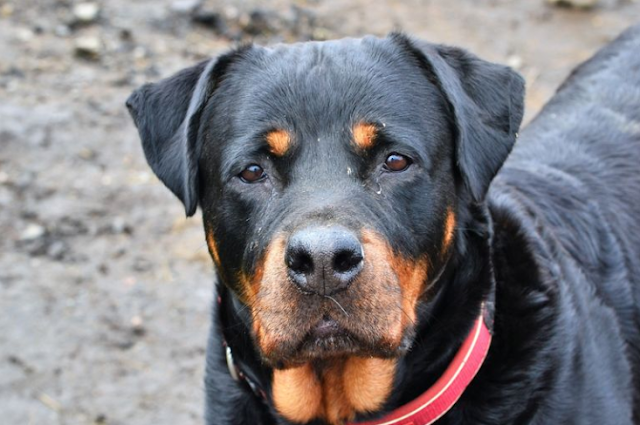 According to a description on the American Kennel Club website, the dogs are “inherent protectors.” The site’s guide continues, “The Rottweiler is self-confident and responds quietly and with a wait-and-see attitude to influences in his environment.” 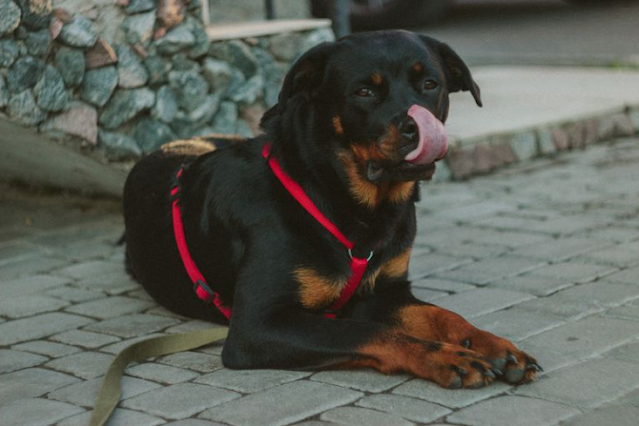 However, with that said, a Rottweiler’s naturally territorial demeanor can sometimes lead to aggression. That tendency combined with the breed’s large and muscular build makes the dogs appear scarier than perhaps they really are. 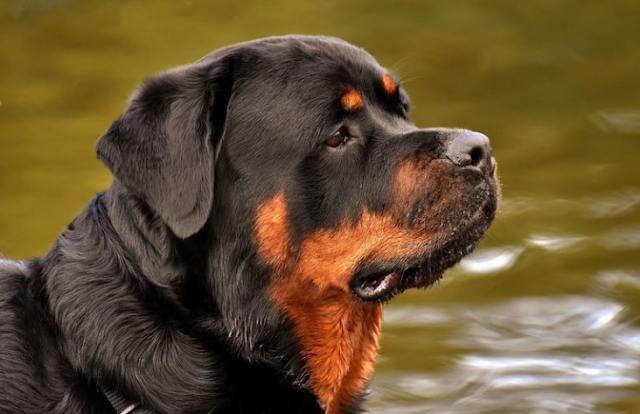 Nevertheless, Rottweilers are considered to be dangerous dogs by many and some countries around the world have restrictions on owning the dogs. In the United States, owning a Rottweiler is legal, but certain cities do have laws relating to the breed. 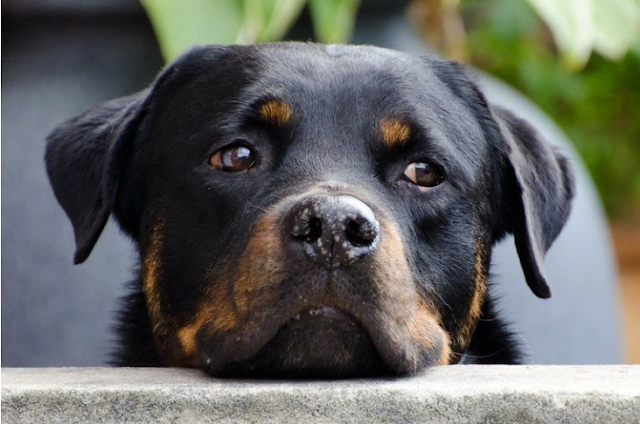 The city of Collins in Mississippi has one of the most stringent laws on Rottweilers, banning them, along with pit bulls, altogether. Elsewhere, the owners of the dogs have to abide by strict rules, including the installation of tall fences and taking out expensive insurance to cover their responsibility should their pet attack anyone. 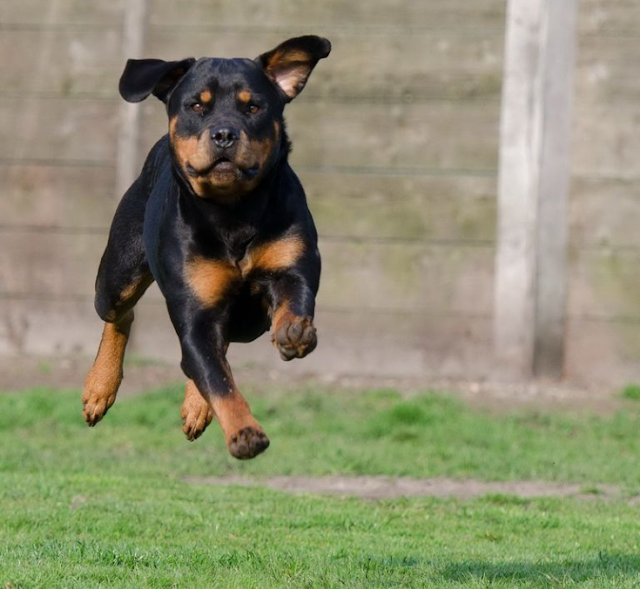 So while it seems that the Rottweilers’ bad reputation is ingrained in the public consciousness, in 2017 a video appeared on Rumble that revealed another side to the maligned breed. It appeared for one doggy at least, all the pet needed to show its softer side was a fluffy bunny rabbit. 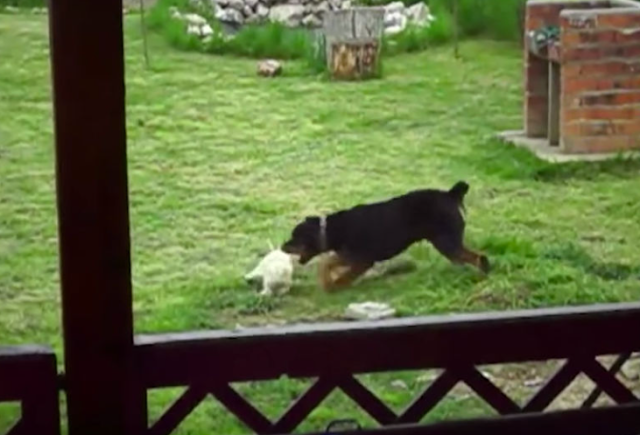 In the footage, the Rottweiler can be seen chasing the rabbit around a yard as someone films the scenes through a window. As the dog nears the bunny, it lunges at the fluffy guest playfully before nipping gently at the floppy-eared intruder. 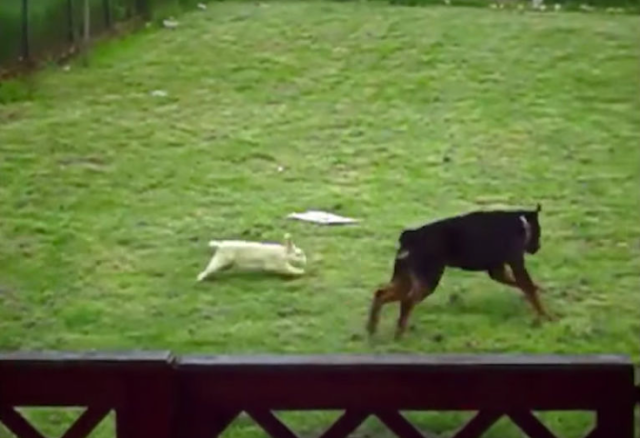 However, the dog doesn’t have the upper hand in the game for long. Soon, the bunny ends up behind the canine, who makes off in a loop. After a while, though, things even out and the Rottweiler and the rabbit end up on the floor, engaged in what looks like a gentle wrestle. 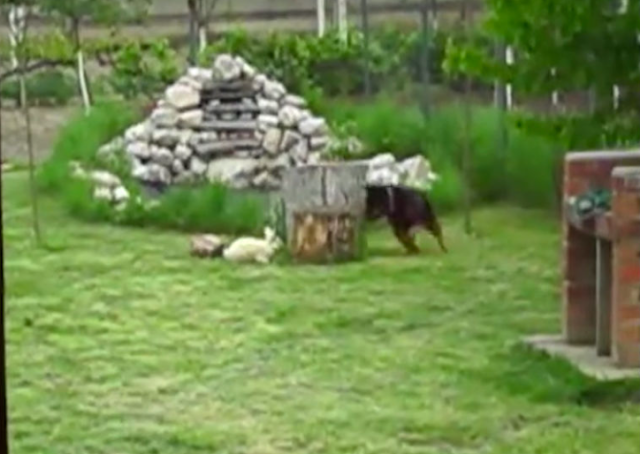 The running soon resumes, once again with the rabbit acting as the chaser. However, after a bit, the bunny hides behind a tree trunk. But it doesn’t stay concealed for long. Its Rottweiler friend soon finds it and pounces softly at the rabbit as if to celebrate a canine victory. 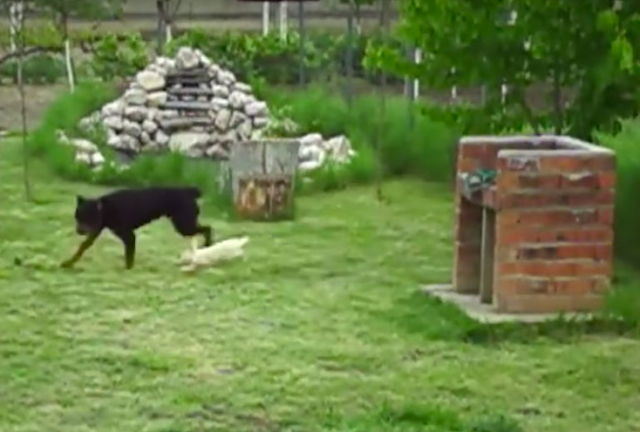 Fun and games between the unlikely pals continue in much the same way for a while, as they continue to run rings around the tree trunk. Every now and then the rabbit pauses presumably for a rest. But with a little cajoling from the Rottweiler the playful bunny soon returns to the action. 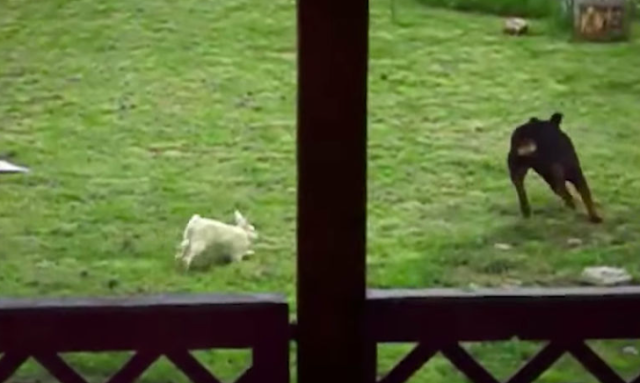 The delightful video ends with the two animals still loving one another’s company. As they run around after one another, they appear oblivious to the rest on the world, including the person capturing their joy on film. 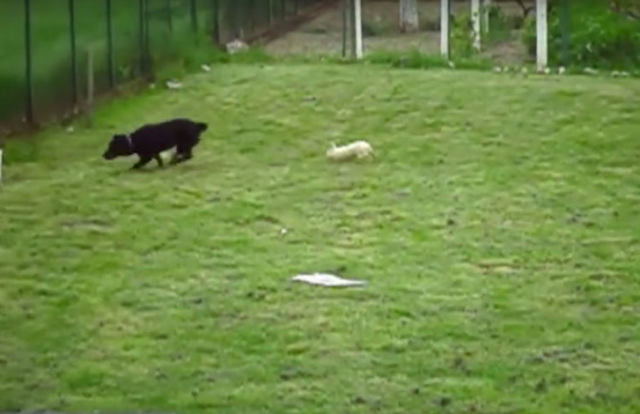 However, while the rabbit and the Rottweiler were seemingly unaware of the happenings of the planet outside their game, it didn’t take long for their friendship to go global. That’s because, after the video of them playing appeared online, it went viral. 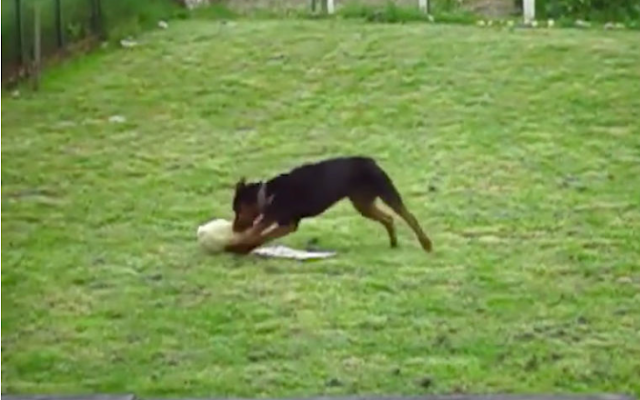 On Rumble, the video appeared under the title “Dog Makes A Very Unusual Friend!” And on the Canada-based video sharing site it has been played more than two million times, earning its owner just over $6,000. 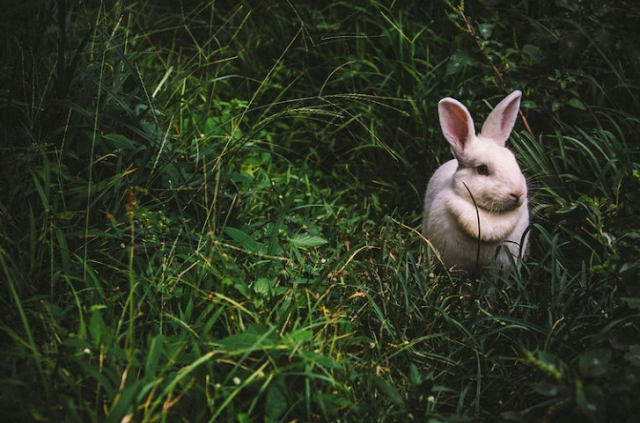 A description accompanying the footage explained, “This playful pooch has found himself a new best friend, and believe it or not, it’s a bunny! Wandering around the yard, doggy finds something moving around, [and then] the pooch realizes that it’s alive! And it’s a bun.” 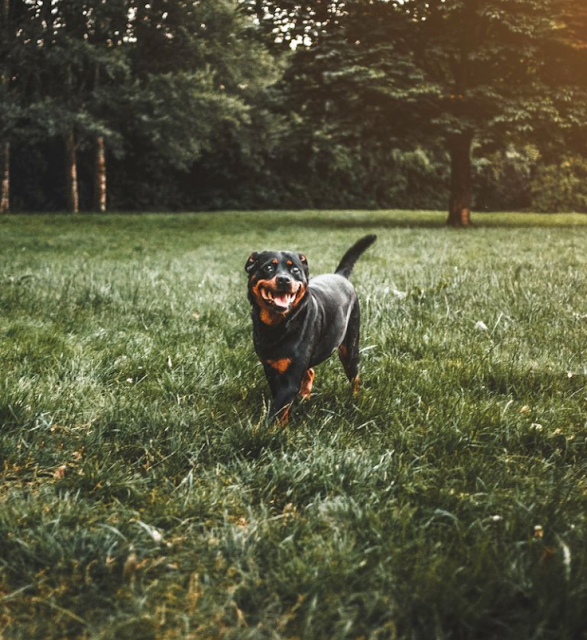 Relaying how the video unfolds, the caption continued, “[The dog] starts chasing it all over the place and looks like [the pup is] begging this little guy to play! Bun needs no persuasion at all, [the rabbit] accepts the challenge and starts running around immediately!” 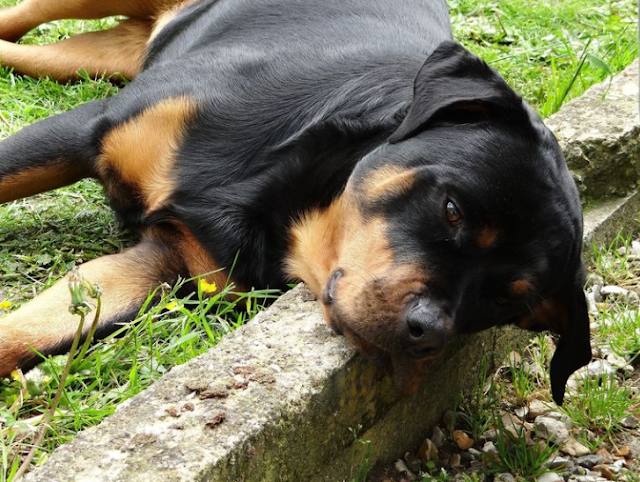 And Rumble wasn’t the only place that the sweet video of the Rottweiler and the bunny appeared. The footage was also uploaded to YouTube, where it clocked up a further 145,000 views as well as a number of positive comments from viewers. 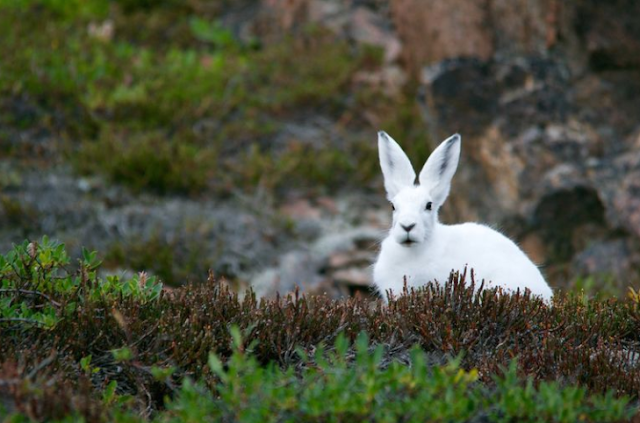 One such comment read, “I’ve never seen anything like this. It’s amazing. That rabbit is so brave. Their friendship is absolutely beautiful.” Meanwhile, another viewer joked, “It’s cute how the bunny chases the dog and the dog is happy about it... LOL.” One further person suggested that, if a rabbit and a Rottweiler could find common ground, then there was some hope for mankind yet. “Even animals are better than us humans who keep fighting over race/color/religion,” they wrote.

So given the Rottweiler’s fearsome reputation, we never thought that we’d see one becoming playmates with a little rabbit. However, their tale just goes to show that friendships can form under the most unlikely of circumstances, and that we shouldn’t judge a book by its cover.