Funny Video: Dachshund Stuck in Coat Sleeve Will Not Be Kept from Guard Duty

Traif can easily get in – but getting out is another story 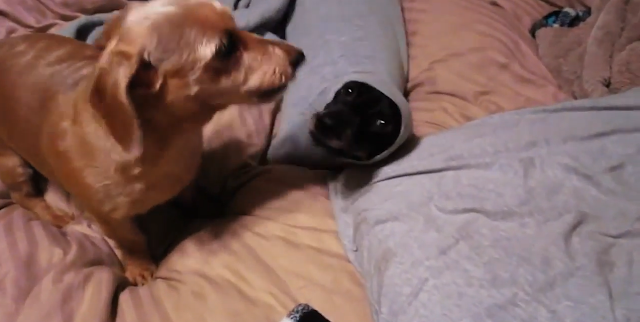 Maybe he just wanted to check out the spring collection?

When Matt Rundquist of Chicago, Ill., paid an unexpected visit to his mother’s house, he was confronted unexpectedly by her dog, Traif, in a bit of a predicament.

Traif, which is Hebrew for “not kosher,” is a dachshund, a breed of dog originally bred to hunt badgers and other burrow-dwelling animals. Judging from the above video, it appears the instinct to squeeze into tight places hasn’t entirely left the present-day descendants of the breed.

Comparisons made in the Reddit and YouTube comment sections where this video originated include Tremors and Dune. We don’t know if Traif would chafe at being compared to giant worms in sci-fi films, but we can probably be sure of one thing – he really wants to get out of that sleeve.