A Shropshire dogs home has received hundreds of phone calls from people wanting to rehome a blind Great Dane and her guide dog. 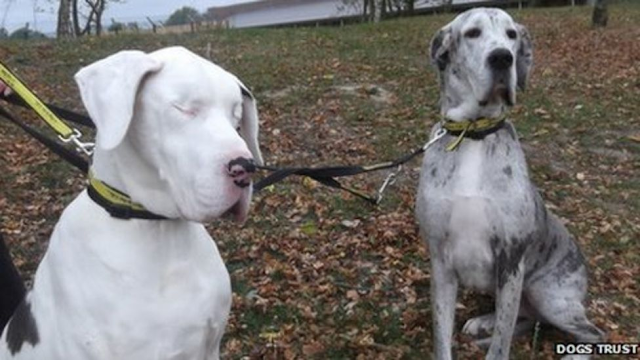 The two Great Danes were left at Shrewsbury Dogs Trust near Newport in July but have yet to find a new home.

Lily, six, had her eyes removed as a puppy and she relies on her seven-year-old companion Maddison.

Since launching an appeal, the trust has taken calls from hundreds of potential new owners.

The dogs' keeper, Gemma Pinchin, said: "I think the future's looking really bright for this pair... we've got someone coming to see them and so many phone calls which obviously we're so grateful for."

The pair were left with the trust when their owners could no longer cope with two Great Danes.

Lily had a condition that caused her eyelashes to grow into her eye balls and she had to have both eyes removed.

The trust said she and Maddison were inseparable but prospective owners had been put off by Lily's appearance or did not have space to take both dogs.

Staff at the centre, formerly known as Dogs Trust Roden, said it would be calling everyone back.