Ellen Mackenzie, from Ontario, US, was baffled when she looked at the back seat of her car to discover her flexible puppy resting his head and legs between the seat as if it was completely normal 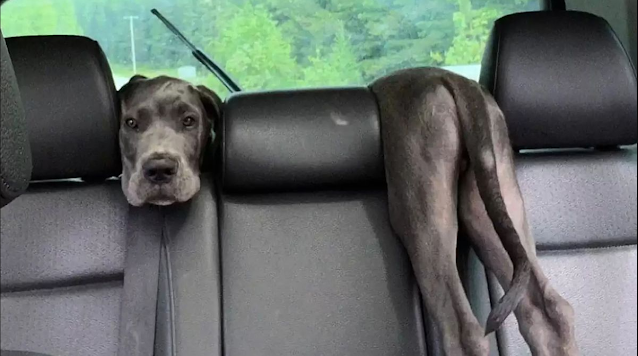 A pet owner has shared the hilarious moment she discovered how flexible her new puppy really is. Ellen Mackenzie, from Wawa, Ontario, US, turned to the back seat of her car to discover Howard, a five-month-old Great Dane in a rather peculiar position.

The puzzled pup was captured resting his head between the seats with his legs dangling over the front - appearing to look like two separate dogs. Ellen shared the hilarious moment on TikTok, where it was viewed by 3.7 million people amused by the pooch.

" He's all legs at the moment. He's still trying to figure out how those work," Ellen said.

Howard's gotten the hang of a few activities so far, like swimming in Lake Superior and calmly walking through dog-friendly stores with his mum.

But he's still working on sitting gracefully in a car - both parked and in motion.

Even though Howard gets full rein of the back seat during car rides, the curious pup likes to explore other spaces within the vehicle.

If the car is parked and his safety harness is unclipped, he happily jumps into the front seat.

When the car is moving, Howard loves to stand on all four legs and stick his head out the open sunroof.

"He'll put his head out and you'll just see ears and chops flapping in the wind," Ellen said.

And if the hatchback's privacy screen is gone, Howard likes to lean over the back seat to get a sniff of whatever's in the trunk.

When something smells particularly good, his long front legs flop over the barrier, leaving his hind legs dangling over the back seat.

Whenever this happens, Ellen knows that she only has a few seconds before Howard eats whatever entices him back there.

That's why, when she looked over her shoulder one day after filling the trunk with food shopping and saw a floating pair of Great Dane legs in the back, she frantically started calling Howard's name. 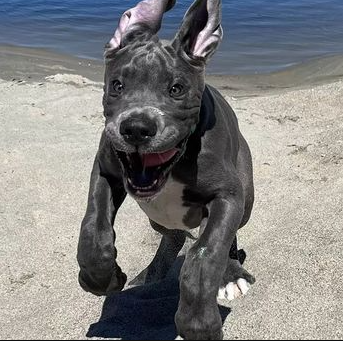 "I didn't want him to get into the bread bag," Ellen said. "I just kept yelling, 'Howard! Get out of there!"

Ellen was able to get Howard's attention, but the tall pup didn't shimmy back into his seat after hearing his name like she hoped he would.

With his front legs still planted in the trunk, he simply turned his head and rested it on the side of the headrest.

Since the car was parked, Ellen made a split-second decision to record the funny moment and sent it to her friends.

They suggested that she put it on TikTok, and when she did, it immediately went viral.

"The look in the puppies eyes when he sees his legs hanging," one person commented, while another said: "Omg this is hilarious. Made my day."

"Watched this over and over. Dogs are brill," a third said.

Thankfully, Howard has since grown too big to wrap himself around the middle headrest.

"Now when he does it, he can't turn around," Ellen said.

"He gets his back end stuck between the middle headrest and the side headrest. I have to stop the car completely to get him unstuck."

Howard's getting taller by the day, which means he won't be able to trunk-surf for much longer.

But the growing Great Dane, who reminds Ellen of Scooby Doo, still has one cheeky car habit that he gets to enjoy.