An adorable video of a sausage dog has gone viral on Reddit for all the right reasons. 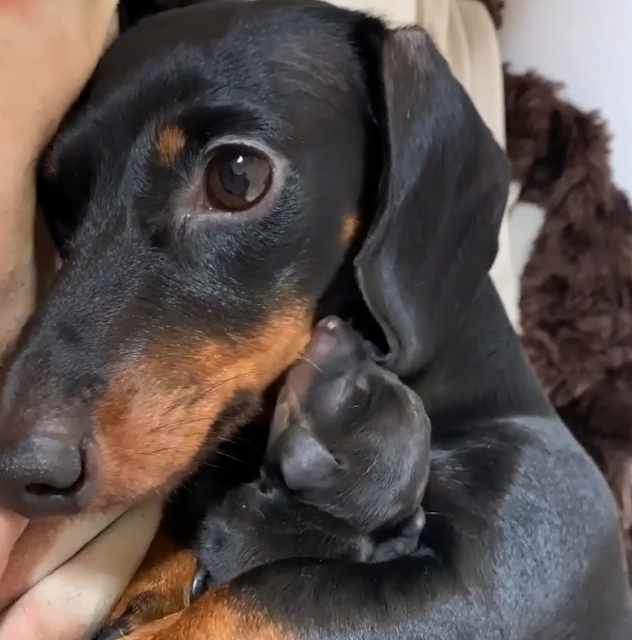 In the video, entitled 'A tired but proud mum,' a beautiful black and tan Dachshund (fondly also known as 'sausage dogs') can be seen lying down taking a rest, with a brand-new puppy wriggling between her front legs, in a post originally posted to the Instagram account loulouminidachshund by owner Evelin Schmit, from Holland.

The video has amassed over 80,000 upvotes and delighted users, while also sparking a conversation about the origins of the breed.

According to the UK charity the People's Dispensary for Sick Animals, "Dachshunds are affectionate and playful little dogs who have a lot of energy considering their smaller size. Once they've tired themselves out getting into mischief, they're happy to curl up somewhere warm with their owner."

They offer these fun facts about the breed:

The first Olympic mascot was a Dachshund called Waldi

Dachshunds love to curl up in warm places, which often means making a little nest for themselves anywhere they can burrow down

One user commented on the origins of the breed, "Fun fact, these dogs were originally bred to chase badgers out of burrows," in a commend with over 1.8k likes.

One user wrote, "Funny enough in German they are more commonly known as "Dackel" and i (as a German) have no idea what that means" to which user Enkrod replied, "Dackel (or Teckel in hunters language) is just short for Dachshund. The old-german form is Dächsel/Dachsel."

Another user chipped in with their own experience of the breed, "Knowledge is everything and some people probably did not know that so thank you! I grew up with them so I did know but we mostly called ours "wiener dogs" or "hot dogs" though mum called them Doxie's. What a lucky breed to have so many loving nicknames."

Users also discussed the funny behavior of their own sausage dogs with one user writing, "Also means they are very comfortable burrowing as well and have been known to get inside couch cushions. One of mine really likes crawling inside pillow cases to get right snuggled up on the pillow."

User hattie29 replied saying, "Several of mine have literally gotten stuck in the arms of my long sleeve shirts as they've tried to burrow in the laundry. I found them and all I saw was a head sticking out of the sleeve and had to shove them back through to get them out."